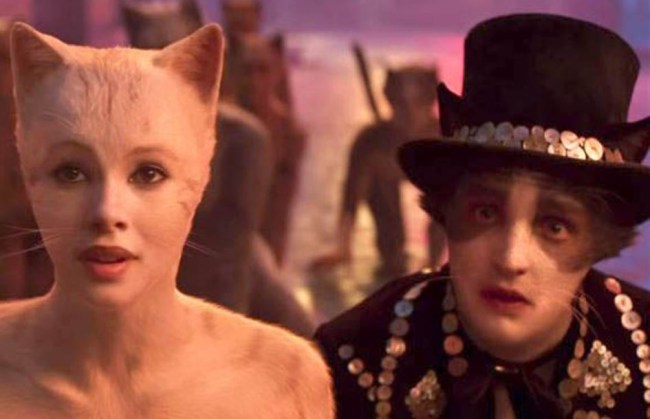 In the 1980s, Andrew Lloyd Weber uncaged Cats on an unsuspecting world and the musical became a veritable sensation, as it held the distinction of being the longest-running show in the history of Broadway before it was unseated by another one of the composer’s joints in the form of Phantom of the Opera.

Given the popularity of Cats, it was only natural that it would be adapted to the big screen at some point, and last summer, we got our first look at what to expect thanks to the release of a star-studded trailer that confused the hell out of virtually everyone who watched it.

As a result, a lot of people were skeptical about how the finished product would be received, and in December, we got our answer when it was universally panned by critics and provided us with some of the most entertaining reviews in recent memory, like:

I am decidedly not a big musical guy. La La Land is one of my favorite movies of all time and Sweeny Todd has some jams, but aside from that, I’m not intimately familiar with the genre and everything I knew about Cats prior to this year I had learned from Team America.

But once I read those reviews, I knew I had to see it.

Thankfully, Alamo Drafthouse was offering screenings where it suspended its “no talking” policy and encouraged viewers to yell shit at the screen, so I bought a ticket and took a page out of Seth Rogan’s playbook by consuming some enjoyment enhancers before making my way to the theater.

The premise alone is truly absurd, as the entire plot (if you can even call it that) basically involves every cat singing a song to introduce themselves, which takes so long that there’s really not much more time for any other developments by the time they’re done.

There are also scenes where Taylor Swift drugs a bunch of felines at a party with catnip like an evil Ken Kesey, Rebel Wilson eats one of the mice she’s apparently enslaved, and Jennifer Hudson “wins” the honor of getting put in a hot air balloon to depart for a supposed paradise even though there’s no way anyone would be able to know where it was going to land.

Never was there ever a movie so batshit insane as Cats and I absolutely loved it to the point where I paid $20 to own it because I know it will be the source of endless entertainment over the course of the rest of my life.

As a result, I was very intrigued a couple of weeks ago when someone claiming to know a video effects specialist who worked on the movie said their friend had been hired to digitally remove the CGI buttholes that were apparently included at some point during production.

A VFX producer friend of a friend was hired in November to finish some of the 400 effects shots in @catsmovie. His entire job was to remove CGI buttholes that had been inserted a few months before. Which means that, somewhere out there, there exists a butthole cut of Cats

I could care less about Zach Snyder’s rumored director’s cut of Justice League but the “Butthole Cut” had suddenly become my white whale.

Shortly after the rumor started to circulate, Gizmodo looked into the matter and concluded there was no evidence that it actually existed, but thankfully, we now have an idea of what it might look like courtesy of a YouTube channel that took the time to give the people what they want.

I can only hope they start a GoFundMe to do this to the entire film because that’s the kind of good cause I can get behind.