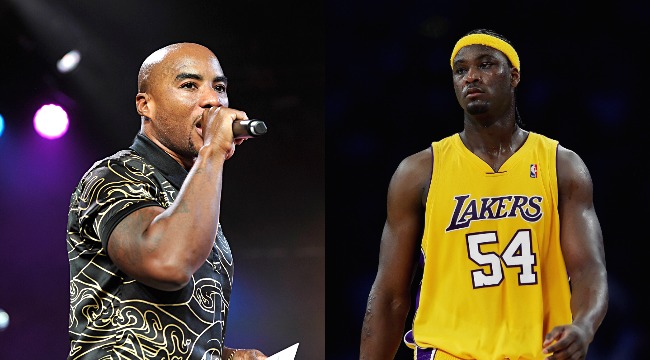 In the eyes of Kwame Brown, Charlamagne Tha God misfired badly in his attempt to defend the former NBA player from the recent ‘Draft Bust’ mockery exacerbated by Matt Barnes, Gilbert Arenas, Stephen Jackson, and others in the sports media landscape.

During an episode of The Breakfast Club last week, Charlamagne urged the public to “leave Kwame Brown alone,” citing his traumatic upbringing as a reason to back off.

Everyone should leave Kwame Brown alone. @cthagod explains why 😳pic.twitter.com/j4HNiLEukh

Charla, who went to school with members of Brown’s family in South Carolina, publicized the following troubling allegations about Kwame’s nuclear family:

Kwame did not take kindly to Charlamagne’s exploitative act, and sounded off on him via IG Live.

“So, I’m wrong because my father had a son at the time that I never met, so you go put out to the world like I’m some killer, when I asked these gentlemen and they said they was joking. So, now it’s time to light you little rapist ass up, too.”

“We gon’ find that girl you raped, punk. Allegedly. Matter of fact, we ain’t gotta say allegedly ’cause you on the docket, b*tch.”

Charlamagne was accused of drugging and raping an underage girl when he 22, but ultimately pleaded to a lesser charge of “contributing to the delinquency of a minor” and received three years of probation.

Brown then received a cease and desist letter from CTG’s lawyers for failing to factually speak about the nuances of the incident, and then amended his ire in a subsequent video.

Charlamagne is now trying to put an end to the madness, apologizing to Kwame on air after giving himself The Breakfast Club’s “Donkey of the Day” award.

“I’m sure I caused pain for not only Kwame Brown but for his family—‘specially, his family in my hometown of Moncks Corner, South Carolina. You know how I know? Because I spoke to a few of them. I was apologizing for triggering them.”

“Since I unintentionally caused trauma, I need to be intentional about causing healing,” Charlamagne said.

Probably best for both of them to put a lid on it. Glass houses and all.