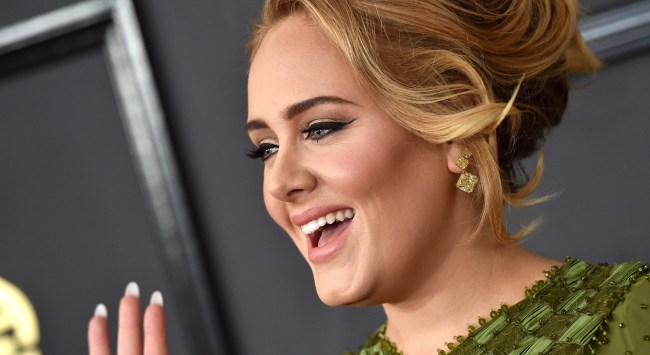 Chet Hanks, aka rapper Chet Haze, aka Tom Hanks’ 30-year-old son (who we interviewed way back in 2011), decided to publicly shoot his shot at 32-year-old singer Adele after seeing her on social media wearing Bantu knots and a Jamaican flag bikini top… as many, MANY people predicted.

[Side note: PLEASE, PLEASE LET THIS HAPPEN. DEAR GOD, AFTER ALL WE’VE BEEN THROUGH IN 2020, WE REALLY NEED THESE TWO TO COUPLE UP.]

Adele, who posted the photo on Monday bemoaning the fact that for the first time in 50 years West London’s Notting Hill Carnival celebrating Caribbean and Black culture in the United Kingdom would not be taking place this summer.

Almost immediately, however, Adele was lambasted with comments accusing her of cultural appropriation thanks to her Jamaican flag bikini top and with her hair up in Bantu knots.

Despite garnering over 5 million likes so far, the photo also made a lot of people angry.

Mostly though, people made jokes. A lot of jokes.

This is truly shocking… when did @Adele become @katyperry ? pic.twitter.com/cbgbP4Zwex

And many defended her.

To all the ignorant non Jamaicans dragging Adele for supporting the Jamaican culture, sit down! You don’t speak for us! We are proud of Adele! Nuff respeck to her! pic.twitter.com/d1GI9Ep7kt

im not defending adele but i know first hand when u first pop out after u lose a lil weight, u really do THE MOST for absolutely no reason

The best comments, however, referred to the fact that for some unknown reason Chet Hanks like to occasionally break out into a Jamaican accent despite being white AF and that he was probably about to hit her up.

Chet Hanks and Adele about to team up and take over the Caribbean. They must be stopped

— I appreciate the hesitation though (@TweetsFromEric_) August 31, 2020

she was fearless and crazier than him. she was his queen, and god help anyone who dared to disrespect his queen pic.twitter.com/cQpfCNZZKa

Adele and Chet Hanks?
This is what Black love looks like ❤️ pic.twitter.com/x88xuXe0b5

So, being the smart man that he is, and sensing a golden opportunity, Chet went for it.

“PLEASE SOMEONE TELL ADELE HIT MY LINE ASAP !!!!!!!!!!!! I NEED TO TALK TO HER ABOUT SOMETHING,” he wrote on Instagram along with a video of himself jamming out to “Set Fire to the Rain.”

I am so rooting for you, Chet.

Rare footage of Adele and Chet Hanks in Jamaica pic.twitter.com/mZGnP3zc91