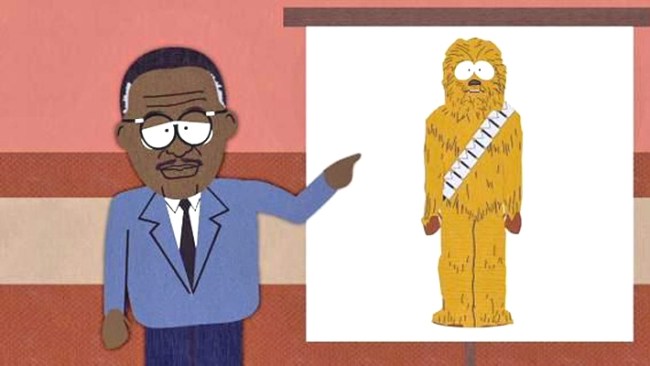 If you weren’t around in the late 90s and early 2000s, it’s difficult to describe how up in arms politically-correct-culture was over South Park when it first started making waves. People just absolutely lost their minds. Kids weren’t allowed to wear South Park t-shirts to school. Television execs called the series “dangerous to the democracy”. Islamic terrorists threatened the lives of series creators Trey Parker and Matt Stone. And yet, over 20 years later, the series remains as present as ever.

Given the way the world has changed in the two decades since South Park has been on the air, the series is now far more respected than it is reviled. But that certainly wasn’t always the case, particularly in the late 90s.

One of those iconic late 90s episodes was the season two entry “Chef Aid”, which satirized the O. J. Simpson murder trial, particularly attorney Johnnie Cochran’s famed “if it doesn’t fit, you must acquit” argument. Despite having not breached the cultural zeitgeist for close to 20 years, “Chef’s Aid” is going viral once again as Twitter users compare the defense of President Trump’s legal team in his impeachment trial to that of the “Chewbacca defense”, the hilarious and legitimate legal strategy coined in that 1998 episode.

A legal tactic in which a criminal defense lawyer tries to confuse the jury instead of refuting the prosecutor's case; a calculated distraction or misdirection

All Bruce Castor needs is a crossbow and this opening would be at peak Chewbacca Defense levels….. #ImpeachmentTrial pic.twitter.com/Osi0XyPYi5

In the years since its airing, the “Chewbacca defense” has become something of a tangible legal strategy. Not only does it have its own Wikipedia page, but it’s been referenced in legitimate circumstances: it was presented in the Florida State Court System and at the 2005 American Academy of Forensic Sciences annual meeting, it’s been referenced in the likes of the Associated Press, the Huffington Post, and the New York Times, and now it’s being used in a historic impeachment trial.