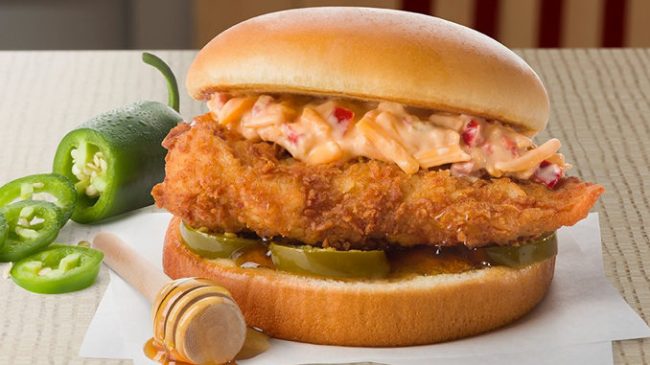 Chick-fil-A brings the South to your mouth with its new Honey Pepper Pimento Chicken Sandwich. The fast-food juggernaut describes the new poultry delicacy as “an original Chick-fil-A Filet drizzled with honey, topped with Southern-style pimento cheese and served on a warm, toasted bun with mild pickled jalapeños.” I’m not drooling, you’re drooling.

For those of you who are northern Yankees and not familiar with pimento cheese, sorry you have not experienced such creamy, cheddar goodness. Pimento cheese is a combination of shredded cheddar cheese, cream cheese, mayo, garlic, onion, and diced pimento peppers. This rich spreadable cheese indulgence pairs well with burgers, tacos, or just eating it on a spoon.

Chef Stuart Tracy, one of Chick-fil-A’s senior culinary developers, said the sandwich has “standout elements” of “savory, salty, sweet, and melty.” He noted that the jalapenos are “entry-level” spice.

“This is the first variation of the Original Chick-fil-A Chicken Sandwich we’ve tested as a seasonal item,” Tracy said. The Honey Pepper Pimento Chicken Sandwich reportedly “won in a landslide” against other potential fried chicken sandwich variations.

This sweet, spicy, cheesy chicken sandwich will not be available to everyone. Yet. The Georgia-based fast-food chain is only testing the Honey Pepper Pimento Chicken Sandwich in two areas: Asheville, North Carolina, and upstate South Carolina. Such a tease. The Honey Pepper Pimento Chicken Sandwich sells for $5.49, and there are options for a spicy filet ($5.79) and a grilled filet ($6.35), according to Chew Boom.

According to a statement from a public relations agency that works with Chick-fil-A, “Customer feedback will help us determine if it will be offered at additional restaurants in the future,” said Brent Reams of marketing agency Jackson Spalding.

For the rest of the country waiting for this Southern chicken sandwich to debut, Chick-fil-A also rolled out two new menu items nationwide: added a fudge brownie ($1.89) and a seasonal Mocha Cream Cold Brew ($2.89).

Video blogger and food reviewer PapiEats was a lucky individual who got his hands on one of these hard-to-find chicken sandwiches.

“Tasty jalapenos, that’s one of the more spicier pimento cheeses that I’ve had, usually its a bit sweeter,” he said in his YouTube video. “This one gets the mix down pretty well. I am a fan.”

“I was wondering what they could do to the sandwich to make it better…and they’ve done it, they’ve covered it in pimento cheese, and thrown jalapenos on the bottom. Oh, and then that honey kicks through, that provides some extra sweetness. I really like this.”