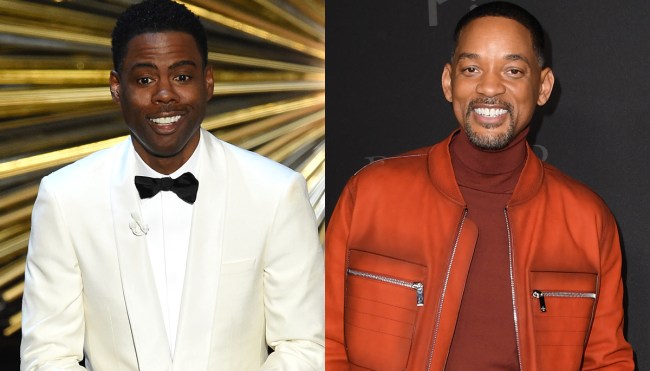 I probably don’t have to tell you that this year’s Academy Awards went off the rails after Will Smith clapped back at Chris Rock for making a joke about his wife by slapping the comedian in the face, as the incident is basically the only thing people have been talking about since it occurred.

While Diddy said the two men quickly reconciled after the ceremony, other reports have disputed that claim, although Smith did issue a public apology on Monday night.

It seems pretty likely the duo would prefer to put The Slap behind them, but that didn’t stop Jake Paul from offering each of them $15 million to settle their differences in the boxing ring just a couple of weeks after he floated a combined $60 offer to Kanye West and Pete Davidson to do the same.

While there’s a virtually nonexistent chance that bout will ever come to fruition, that didn’t stop Bovada from releasing the betting odds for Rock vs. Smith, and based on their evaluation, the theoretical matchup isn’t as lopsided as you may think.

If Will Smith and Chris Rock square up in the boxing ring, who you taking?

It makes sense that Smith is the favorite here, as the 53-year-old stands at 6’2″ and weighed in at 201 pounds last year after embarking on a weight loss journey he says led to him being in the best shape of his life.

The 57-year-old Rock, on the other hand, is 5’10” and (based on the super scientific estimates I found online) tips the scales at about 170 pounds.

However, you have to wonder why Smith is only listed at -220, as it’s hard to believe the guy who spent six days a week working out with a world-class boxing trainer while getting in shape for Ali (and developing a skill set that would allow him to convincingly portray the greatest boxer of all time) could ever lose to Rock.

If I’ve learned anything from my adventures in sports betting, it’s that you should never question the rationale of the oddsmakers when things seem too good to be true, but you have to think a bet on Smith would be easy money if this fight ever actually happened.