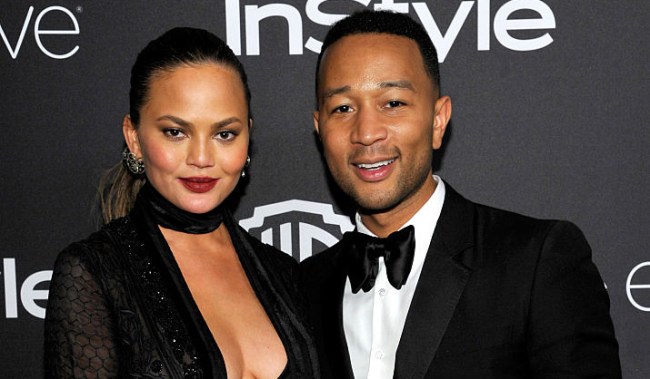 So, I’m sitting at dinner last night and someone asks me ‘were you following the crazy ass day Chrissy Teigen had on Twitter?’ I pop over to Twitter, and I’m legit shocked by the ridiculous day that I could see unfold in my feed.

Chrissy Teigen is working out the kinds on a new Banana Bread recipe for her second cookbook, and she needed 6 rotten/brown bananas to make that bread. Instead of waiting a few days with those bananas ripening in a brown paper bag like a normal human being Chrissy took to Twitter and offered to trade a signed copy of her cookbook and a pair of her husband’s used underwear to anyone that would hook her up with bananas. She then sent her mother out into the streets of L.A. to make the trade.

But it didn’t end there. She only got 5 rotten bananas on her first trade so she was forced to barter another pair of John Legend’s underwear for 2 more bananas. I can’t really explain it, but this is some of the funniest shit I’ve ever seen unfold on Twitter:

ok this banana thing is getting ridiculous. don't tell me your banana browning hacks. just…if u have 6 BROWN bananas in the LA area lmk

if u have 6 BROWN bananas in the LA area, I will send my assistant to your home with a signed cookbook, John's underwear and a Becca palette

SERIOUS INQUIRIES ONLY. please send me a photo of u holding the bananas, giving the peace sign

SO CLOSE. she might kill me if she has to drive to multiple homes across LA https://t.co/k7bvlH93rO

ok and @onairjake has 2….WE NEED ONE MORE! or, a single person with 6. this is gonna be a long day https://t.co/xbNyJIlN1y

SO DOES SHE! ok I think 5 will do. thank you so much will DM you now!!! https://t.co/mCWqYaxLzl

banana submissions are now closed. thank you guys so much I will send the runner ups some banana bread once done

just for safety, my assistant asks that u taste a small piece of the banana in front of her before making the trade https://t.co/k7bvlH93rO

Her assistant, by the way, is her mom:

the deal has been done. thank you, @bymeg!!!! pic.twitter.com/f1wDrzO31Z

What the fuck is that dog wearing?!?

already home. that was…so fast. I will now do all grocery shopping like this pic.twitter.com/DLAzKvDezI

I really, really hate to say this but. I need one more banana pic.twitter.com/DBqKjQpSM7

one of the cutest things I've ever seen @onairjake pic.twitter.com/5YxPXsnPNK

It was all worth it.

If this was anybody else, I’d say this was the most elaborate guerilla marketing campaign of 2017. But this is Chrissy Teigen, and she’s the type of person to send her mom out into the streets of L.A. to get some weird shit she found on Twitter, and she’s willing to trade her husband’s underwear for some bananas. That’s just how she rolls.