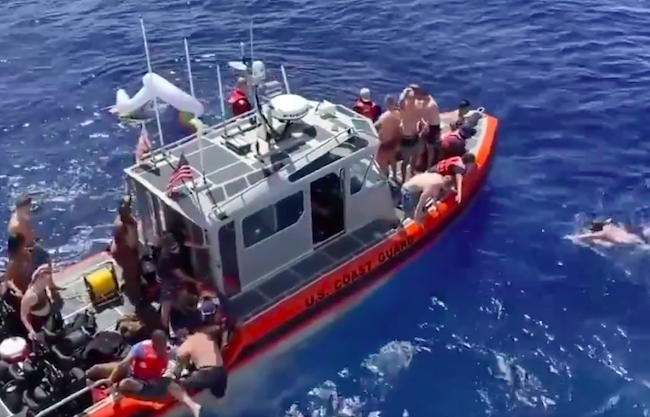 The vast majority of advice concerning the best thing to do when you encounter a dangerous animal in the wild usually involves standing your ground or slowly backing away from whatever potential threat you encounter. While this philosophy also applies if you ever attract the attention of a shark while swimming, common knowledge dictates there’s one particularly effective strategy you can deploy if it opts to take a nibble: punch it in the fucking face.

It might sound a bit absurd but experts say targeting sensitive areas like the nose, eyes, and gills is your best bet if you ever find yourself at the receiving end of the attack and swimmers have repeatedly proven this can be an incredibly effective tactic (it’s unclear if telling it to “Fuck off” makes any noticeable difference but it’s probably not going to hurt).

With that said, such an approach isn’t without its risks, as those aforementioned areas are all in the direct vicinity of the multiple rows of magically regenerating razor-sharp teeth many of those creatures possess and hitting it in the snout can possibly backfire thanks to the receptors that could potentially tell the shark you’d make a suitable meal. As a result, you should use objects like cameras and rocks if possible when you don’t have the luxury of giving one of these formidable creatures of the deep the same treat Martin Brody gave to the beast at the end of Jaws.

While the more than 30 members of the United States Coast Guard cutter Kimball who opted to take a dip in the Pacific Ocean with an inflatable unicorn earlier this week weren’t packing heat, the same couldn’t be said for the crew aboard the vessel that spotted what was believed to be a shark of the mako or thresher variety between six to eight feet in length that decided to investigate the commotion.

The people who had their swim rudely interrupted were quickly alerted to vacate the water while the specialists on board opened fire on the shark in an attempt to provide them with some cover as they climbed to safety aboard a smaller vessel.

The U.S. Coast Guard has released footage of crew members shooting at a shark.

They say the shark approached around 40 of their crew, who were swimming in the Pacific Ocean, when a maritime enforcement specialist still on board fired at it. pic.twitter.com/MLCmFdMk30

The shark didn’t appear to be hit with any rounds and officials said the only casualty was a guardsman who scraped his knee while getting out of the water—which just so happened to be located near the jaws of the shark tattoo they have because the universe apparently still has a sense of humor despite all of the other evidence to the contrary that’s emerged in 2020 so far.