A Bankrupt Coffee Shop Cost Me The Club Championship This Weekend 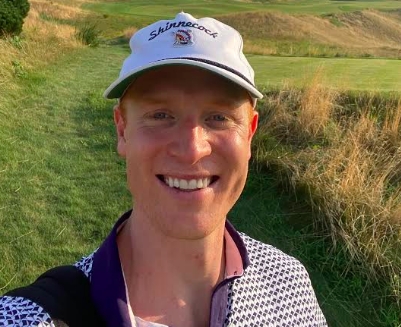 The club championship was Saturday and Sunday. Two days of stroke play, 36 holes, winner take all—all $400 of pro shop credit. Look at me turning my nose up at that. That’s a new Scotty, or three quarter zips, or four Greyson polos; in other words, a solid haul. But the real prize is having your name engraved on the plaque of champions. It’s the first thing you see when you enter the club, before the bowl of hard candies at the receptionist’s desk, before the banquet room that held our prom, before the super clean bathroom that smells nice and clean and was my one exception to never pooping away from home from seven to fourteen.

I signed up for the top flight, of course. Black tees? No problem; I’m huge off the tee. I’m Bryson Dechambeau when everyone else is fat and old. Tee times were random, and I was given 8:20AM. Early but not the worst. Honestly, I was glad to have the early slot because my girlfriend and I had another couple visiting us and I needed to be home for swinging.

On Friday night, I did not behave as though I had to play a competitive sport the next morning. Or focus. Or be able to control my motor functions. Instead, I ate edibles like they were regular food and drank spicy mezcal margaritas straight from the cocktail mixer because why dirty another glass? Spring water tastes best when you kneel upon the earth and sup the clean, cold goodness straight from nature’s teet; why, then, would I transfer my cocktail from its womb to some secondary vessel? So that our guests would feel more comfortable? Never, say I! Take your social contract and stick it up your ass, one anal bead of polite society at a time.

You can imagine my horror when I awoke on Saturday at 7:15AM and the edibles had not only NOT worn off, but intensified. More high? Sure, that should help my short game. I stumbled out of bed, drew a face bath (that’s when you put the stopper in the sink and then submerge your face and blow bubbles for a while), and wobbled to the car around 7:40. The club is 20 minutes away. I wanted a FEW minutes on the range, or the practice green at least. But I needed some cold brew like Kanye needs a new prescription.

There are two coffee shops on the way to the club. I had checked on Google maps that both were open that early, and when I arrived at the first, I saw a line already out the door, so I continued on to the second—another ten minutes. But when I pulled up to MAINE ROASTERS COFFEE in Yarmouth, despite Google telling me they were open, they were, in fact, closed. And I’m fairly sure they’re not coming back. A hand-written sign on the front door said “we have loved serving you” or something sentimental that didn’t sound promising for their future.

By this point, it was too late to go back to the first shop. I had no choice but to drive another 10 minutes to a Starbucks, and I hate Starbucks. I only go there when I’m at some sort of transit terminal—train, plane, bus I guess, if my life fell apart. With a cold brew and their patented turkey bacon/egg white “sandwich,” I hustled to the course.

I played in the club championship today. These were my thoughts before the round. I thought I was joking around.

One hundred and two, in the top flight of my club championship. pic.twitter.com/OrW05mURsy

I arrived at 8:12. Instead of taking five minutes to roll some putts, I goofed around in the pro shop, talking about how I was going to win, pointing to things I would buy with my $400 credit, flirting with the male pro even though I would never, etc. Then, it was time.

My handicap index is 3.9 right now. Here are my last handful of scores from this year:

As you can see, the day went poorly. On the first hole, I hit 4-iron off the tee because I hadn’t swung a club yet, and I found the fairway. Then I topped a 9-iron into the greenside bunker. Then I thinned a sand wedge over the green into the woods. Then I punched out and hit a rock that knocked the ball back into the woods. Then I skulled one over the green again. Then I chipped on and two putted… for an 8.

A snowman. On the opening hole.

From there, the day proceeded like one long rehab process from a stroke. It was like I was learning to walk and feed myself for the first time. I had a nine on a par four. I had two more eights. It was the worst round of golf I’ve played since I was a young teenager, running around the Freeport municipal 9-hole course at twilight, trying to get in before I could no longer see my ball in the dark.

Thank God my group was cool. Shoutout to Shawn and Alex, two standup guys, who supported me through thick and thin. We actually had a blast and it made me realize how pathetic it is that I get so angry when I shoot 88. If you can shoot 102 as a 4 handicap and have a good time, the game should never affect you that much.

Who do I blame? Maine Roasters Coffee. Or maybe Google for not updating and saying they were still open. Had I been able to get my coffee as planned, I would have hit a handful of 9-irons on the range. I wouldn’t have topped that first approach into the bunker, wouldn’t have skulled it over, wouldn’t have started with a quadruple bogey, and WOULD have won the club championship.

And you would pass my name on the plaque near the nice bathroom for all time.

The butterfly effect, or something. Everything is connected—Dark on Netflix.