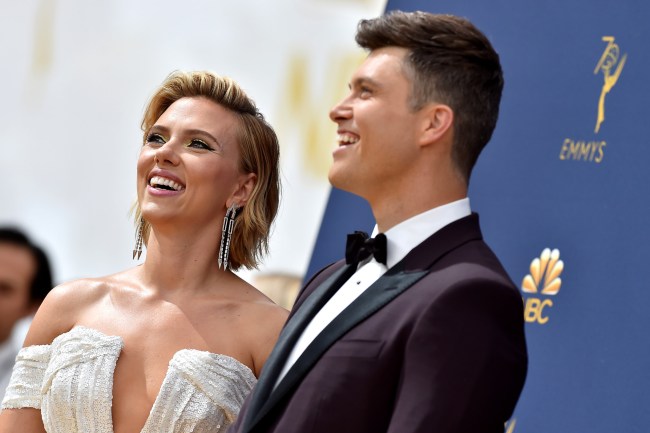 Comedian and Saturday Night Live star Colin Jost has somehow managed to date Scarlett Johansson for over three years now, even becoming engaged to the Avengers star last May.

And when I say “somehow” I mean that in no way as a slight to him. After this length of time dating her, he’s obviously a worthy suitor. What I mean is, I don’t care who you are, if you not only manage to meet Scarlett Johansson, then actually get a date with her, and amazingly, turn that into a three-plus year relationship, and THEN get engaged to her, well, the gods are smiling on you, my friend.

On top of that, Jost HAS to be a truly special person because back in the March/April 2017 issue of Playboy, ScarJo literally said, “I don’t think it’s natural to be a monogamous person.”

“That was definitely a worry,” Jost told Howard Stern this week. “The lucky thing was that people in the cast [of SNL] really liked her when she was there as a host. It wasn’t like I was dating someone who was like a monster and then was around and that kind of thing.

“But yeah, I worried about my identity with it, and also it’s comedy. You work in comedy, so I was always worried about anything that felt non-comedy or took me out of the world of comedy. … You have to keep your own identity and do your own thing.”

Stern then brought up the fact that if it were him, he wouldn’t be able to deal with Johansson doing love scenes in movies.

“Yeah, you know, it hasn’t, I don’t think it’s really happened that I’ve experienced it yet since we’ve been dating,’ Jost replied, then joked, “I’m gonna try and push her into a lot more animated stuff. Just all voice work.”

Stern then suggested using COVID-19 as a “loophole” to stop Johansson from doing any love scenes and asked Jost if that’s been a problem for him.

Jost and Stern also discussed numerous other topics while he was on the show including whether or not he is leaving Saturday Night Live, a sketch with Shia LaBeouf that he tried but couldn’t get on the air, the bad reviews he got when he first started hosting “Weekend Update,” how his mother was a first responder on 9/11, and most importantly, how Jost once sh*t his pants while golfing.