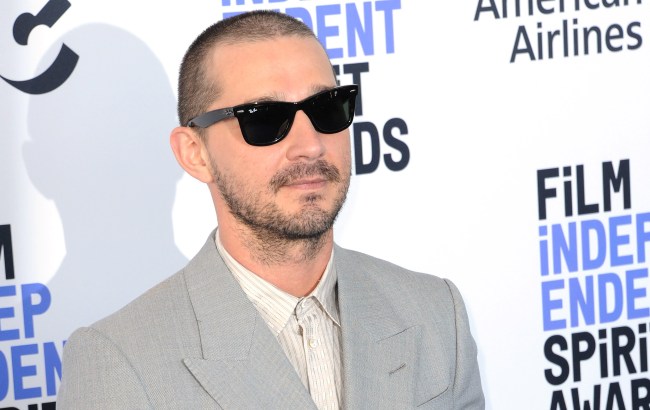 God love Shia LaBeouf. Bro just tries so hard to be metal. The thing is, it’s easy to try to be the guy who just DGAF when your net worth is reportedly somewhere in the neighborhood of $25 million.

Granted, LaBeouf wasn’t always rich, and he was raised by, according to him, a couple of “hippies,” but that really doesn’t excuse making racist comments to a black cop, getting arrested for being drunk and disorderly in public, getting kicked out of a bowling alley after losing his mind over some french fries, punching a college student in the face, etc.

Now, just to prove what a radical dude he is, remember that giant, body-covering set of tattoos that he was sporting in a photo posted to Twitter by director David Ayer back in 2018?

Yeah… turns out those tattoos are real, bro.

That’s right. LaBeouf actually has the word “Creeper” tattooed across his stomach in addition to numerous other ink art because he did it… for a movie.

In the movie, The Tax Collector, LaBeouf, despite many people on social media accusing him of doing “brownface,” plays a Jewish guy who grew up in the hood, says Ayer.

Really important answer – Shia is playing a whiteboy who grew up in the hood. This is a Jewish dude playing a white character. Also the only white dude in the movie 💁‍♂️ https://t.co/PS6foJwQXV

Speaking to SlashFilm about LaBeouf and the movie, Ayer said, “He’s one of the best actors I’ve worked with, and he’s the most committed to body and soul. He had a tooth pulled on Fury, and then on Tax Collector, he got his whole chest tattooed. So he kind of goes all in, and I’ve never known anyone that committed.”

He got 12 tattoos (including two of Missy Elliott) while filming another movie, American Honey, which the director reportedly didn’t like because it had the potential to make him look different from one scene to the next.

And why did he do that?

Because, as LaBeouf explained, “One of the things we’d do as a group, we’d all go to the f***ing tattoo shop…I don’t love Missy Elliott like I wanna get two Missy Elliott tattoos…But you’re in a tattoo parlor, and peer pressure.”

If you had told me 10 years ago that the kid from even Stevens would tattoo his entire chest for a film role. I would’ve told you that’s EXACTLY what I expected him to be doing.

Getting a giant tattoo on my chest in solidarity with Shia LaBeouf.