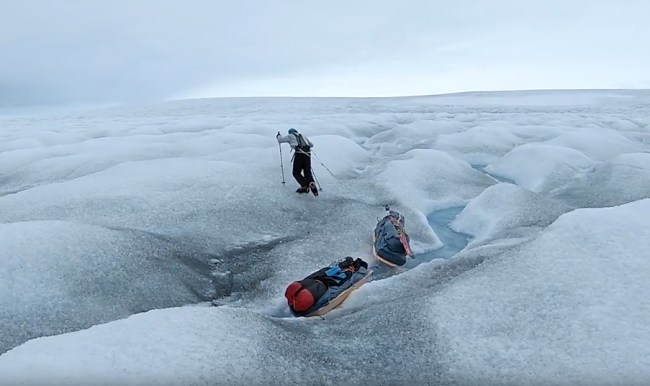 American explorer Colin O’Brady has achieved the unbelievable. Against all odds, the 33-year-old adventurer became the first human being to cross Antarctica. The 932-mile battle against the freezing elements took 54 days and he made an incredible last push with an “ultramarathon” effort.

O’Brady, who was told by doctors he would never walk normally again when he was 23-years-old, accomplished the first solo unsupported trek across Antarctica on Wednesday after giving all that he had to make it across the icy, inhospitable terrain. O’Grady’s crossing is truly remarkable because he did not use a kite to propel him, it was completely unaided, and did not receive any supplies.

O’Brady knew the finish line was close and put forth a spectacular effort. In the last 80 miles of his mission, O’Brady decided he would do the last stretch in one final exhausting push that took over a day to complete. With 77.54 miles left in his expedition that he called “The Impossible First,” he made the decision to not sleep and just keep pushing forward until he achieved his goal. O’Brady went the last 32 hours of his strenuous journey without sleeping becoming the first person in history to cross the frozen southern continent.

“Something overcame me,” O’Brady said of his final push. “I didn’t listen to any music – just locked in, like I’m going until I’m done. It was profound, it was beautiful and it was an amazing way to finish. While the last 32 hours were some of the most challenging hours of my life, they have quite honestly been some of the best moments I have ever experienced.”

“I did it!” a tearful Brady said to his wife Jenna Besaw and family in Portland, Oregon. “It was an emotional call,” Jenna said. “He seemed overwhelmed by love and gratitude, and he really wanted to say ‘Thank you’ to all of us.” O’Brady even accomplished the miraculous feat ahead of schedule.

Day 54: FINISH LINE!!! I did it! The Impossible First. 32 hours and 30 minutes after leaving my last camp early Christmas morning, I covered the remaining ~80 miles in one continuous “Antarctica Ultramarathon” push to the finish line. The wooden post in the background of this picture marks the edge of the Ross Ice Shelf, where Antarctica’s land mass ends and the sea ice begins. As I pulled my sled over this invisible line, I accomplished my goal: to become the first person in history to traverse the continent of Antarctica coast to coast solo, unsupported and unaided. While the last 32 hours were some of the most challenging hours of my life, they have quite honestly been some of the best moments I have ever experienced. I was locked in a deep flow state the entire time, equally focused on the end goal, while allowing my mind to recount the profound lessons of this journey. I’m delirious writing this as I haven’t slept yet. There is so much to process and integrate and there will be many more posts to acknowledge the incredible group of people who supported this project. But for now, I want to simply recognize my #1 who I, of course, called immediately upon finishing. I burst into tears making this call. I was never alone out there. @jennabesaw you walked every step with me and guided me with your courage and strength. WE DID IT!! We turned our dream into reality and proved that The Impossible First is indeed possible. “It always seems impossible until it’s done.” – Nelson Mandela. #TheImpossibleFirst #BePossible

British adventurers Henry Worsley and Ben Saunders, two of the world’s most accomplished polar explorers, never were able to trek across Antarctica on a solo expedition. Worsley died trying to journey across Antarctica.

O’Brady began his unthinkable adventure on November 3rd and dragged 375 pounds of supplies, food, and his tent across the unforgiving landscape that features hills made of ice called “sastrugi.” “Not only am I pulling my … sled all day, but I’m pulling it up and over thousands of these sastrugi speed bumps created by the violent wind,” O’Brady wrote in an Instagram post on November 12th. “It’s a frustrating process at times to say the least.”

“I’m no longer the same person I was when I left on the journey, can you see it in my face?” O’Brady wrote on Instagram. “I’ve suffered, been deathly afraid, cold and alone. I’ve laughed and danced, cried tears of joy and been awestruck with love and inspiration.”

“There were several times I considered stopping, putting my tent back up and calling it a day,” he said of his brave journey. “I wanted so badly to quit today as I was feeling exhausted and alone, but remembering all of the positivity that so many people have been sending, I took a deep breath and focused on maintaining forward progress one step at a time and managed to finish a full day.”

“This is something that no one in history has ever accomplished, and people have been trying for 100 years,” O’Brady said.

In 2016, O’Brady notched his first epic world record by trekking to the top of the highest peaks on all seven continents in a mere 132 days, which included Everest. You really need to read about Colin O’Brady’s absolutely incredible life and how he completely tackled every challenge that life put in front of him, you can do so HERE.