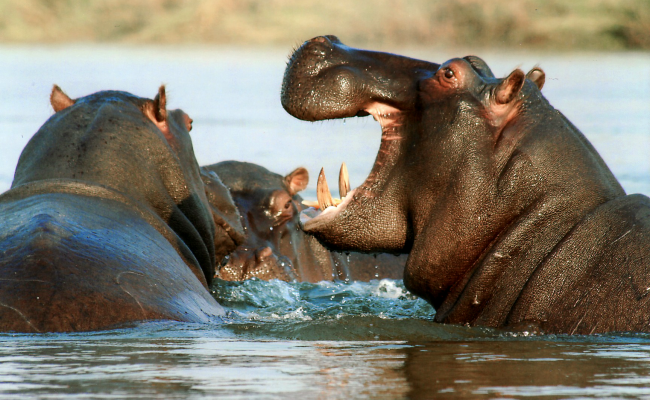 Ever since Pablo Escobar, the head of the Medellin Cartel, was killed in a shootout in 1993 the country of Colombia has had a problem on their hands. A really, really big problem. What should they do with Escobar’s so-called “cocaine hippos.”

What started out as four hippos (one male and three females) in Escobar’s personal exotic zoo at his Hacienda Nápoles compound has now turned into a serious environmental threat as researchers in a new VICE documentary say the hippo population there could grow to more than 1,400 By 2039.

Of note, hippos aren’t supposed to be in South America, especially not 1,400 of them. Their native land is Sub-Saharan Africa.

The problem is, Escobar’s “cocaine hippos” won’t stop having sex and just keep multiplying. There were 35 of them in 2012, but that number quickly shot up to 80 by 2020 and they have now taken over the Magdalena wetlands.

Which wouldn’t be so terrible if they weren’t poisoning the rivers down there with tons of toxic poop and urine, threatening the health of the other wildlife in the area including the fish.

Related: Colombia Is Facing An Environmental Crisis Because Pablo Escobar’s Hippos Can’t Stop Pooping All Over The Country

“The real problem with hippos is their uncontrollable reproduction. Being such a territorial species, it offers a lot of danger for the fishing population and other people who live in this area,” government environmental researcher, David Echeverri-Lopez, told VICE.

The hippos, which weigh in at around 4,000 pounds, are wreaking such havoc on the environment and wildlife in Colombia that the government has even looked into castration as an option.

Unfortunately, according to Indy100.com, “one hippo a year was the best the scientists could do because the hippos’ internal testes are hard to reach.”

Plus, who wants that job?

Authorities were also going to attempt to cull the hippo herd, but it had to be cancelled due to public opposition.

“Sterilization alone is not going to be enough to control this invasion,” said Nataly Castelblanco-Martínez, an ecologist at the University of Quintana Roo. “If we cull a certain amount of individuals per year, it is possible to eradicate the population.”

Related: Hippos Chasing Tourists In A Speeding Boat Is A Reminder They Are Truly Terrifying Animals

The hard part, it appears, will be getting the public’s approval. The hippos are now famous have become a tourist attraction with a theme park and hippo safari tours.

“Our findings show the urgent need of taking critical management decisions by the Colombian authorities, which should be focused on limiting the hippos’ population growth and expansion,” researchers said in January.

“However, the proposal of a course of action can become controversial when the species has a charismatic value for the society, regardless of its ecological or social impact.”