Conan O’Brien Settles Lawsuit From Twitter Comedian Who Claims He Stole Five Of His Jokes, Explains Why 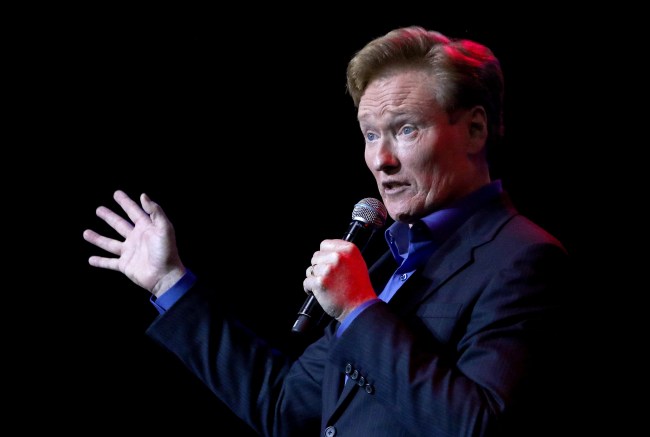 Stealing jokes in the comedy world is the equivalent to peeing on the chili Karen brought for the office’s long anticipated pot luck lunch. It can be a career-altering offense. Joe Rogan nearly jiu-jitsu’ed Carlos Mencia onstage for shamelessly ripping others’ material. Dane Cook was blasted allegedly stealing a bit about naming children from Louis CK–the two would later address the scandal on Louie, with Cook chalking it up to a case of cryptomnesia (when a forgotten memory returns without it being recognized as such by the subject, who believes it is something new and original.)

Conan O’Brien and his writers were very publicly sued in July 2015 by a man Robert “Alex” Kaseberg. Kaseberg is a comedian of sorts who claims credit for thousands of jokes used by Jay Leno and whose material has appeared in The New York Times and The Washington Post. The freelance comedy writer sued Conan O’Brien for copyright infringement on five of his jokes allegedly stolen from his Twitter account from December 2014 to June 2015. Here are three that he claims were jacked.

“Tom Brady said he wants to give his MVP truck to the man who won the game for the Patriots. So enjoy that truck, Pete Carroll.”

O’Brien said on his show (later that night): “Tom Brady said he wants to give the truck that he was given as Super Bowl MVP . . . to the guy who won the Super Bowl for the Patriots. Which is very nice. I think that’s nice. I do. Yes. So Brady’s giving his truck to Seahawks coach Pete Carroll.”

Kaseberg tweeted on Feb. 17. 2016: “The Washington Monument is ten inches shorter than previously thought. You know the winter has been cold when a monument suffers from shrinkage.”

O’Brien’s joke (later that day): “Yesterday, surveyors announced that the Washington Monument is ten inches shorter than what’s been recorded. Yeah! Of course the monument’s blaming the shrinkage on the cold weather. That’s a penis joke.”

Kaseberg’s tweet, June 9, 2015: “Three streets named Bruce Jenner might have to change names. And one could go from a cul-de-sac to cul-de-sackless.”

O’Brien’s joke (later that night): “Some cities that have streets named after Bruce Jenner are trying to change the streets’ names to Caitlyn Jenner. And if you live on Bruce Jenner Cul-de-Sac, it will now be called a Cul-de-No-Sac.”

It has recently been revealed that a furious Conan O’Brien settled the lawsuit over the alleged theft, which had been expected to go to trial in federal court in San Diego this month. A judge ruled that three of the jokes could reasonably have been plagiarized by O’Brien, according to the New York Times.

Terms of the settlement were not disclosed, but in an open letter titled ‘My Stupid Lawsuit’ shared with Variety, Conan fights for his honor and claims he would never knowingly commit the cardinal sin.

I will tell you what we told him, and what we subsequently swore under oath in a deposition: we had never heard of him or his blog or Twitter account, and we did not steal any of his jokes.

Conan points to the fact that with the 321 million monthly Twitter users, and “seemingly 60% of them budding comedy writers,” overlap is inevitable.

Two years ago one of our writers came up with a joke referencing Kendall Jenner’s ill-fated Pepsi commercial, and so did 111 Twitter users.

And, by the way, the person who sued me also tweeted the same Pepsi joke, but only after our show and 24 other tweeters beat him to it.

After news of the lawsuit broke in 2015, Conan employed a writers assistant to monitor the accuser’s tweets to avoid any other accidental overlap, and “she discovered 15 examples where he tweeted similar jokes AFTER we had written them for my program.”

I need to know what this payout was. If it was any amount over $300 I’m going to shit myself.