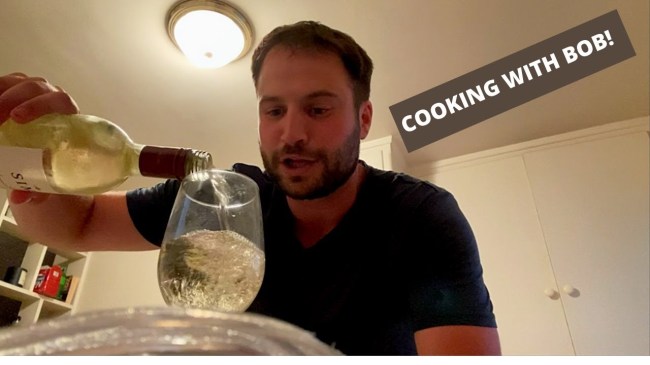 I was always a big Rachael Ray guy, not so much for the fact that she makes a mean chili but there was always something about her. I always felt like Ray was just turning on the oven and throwing something together for my personal enjoyment. Years later, she is still getting after it in Food Network kitchens and her own. But what if she had absolutely no idea what she was doing and had a good wine buzz going while attempting to cook? That’s where The Brilliantly Dumb Show comes in.

Today we released our first episode of ‘Cooking with Bob’ and it is honestly just ridiculous. Not only do I not really know what I’m doing, but I’m working with an oven that had to be made at some point before the 1920’s. I knew I couldn’t play it off like I knew what I was doing, so I just addressed the issue pretty head-on and let people know this was my first time cooking on camera.

Amongst other issues, things really start to go south when my apartment cranks up to 82 degrees while I am trying to sear a ribeye in a cast-iron skillet; not a good mix. Episode 1 was unpredictable and had absolutely no structure, just the way I like it. I think moving forward it’s best that I actually show the cooking process and maybe even some of the food, after all, it is a cooking show. Either way, we laughed and had a good time, that’s all I can ask for.

To learn more on how to overcook a ribeye steak while keeping subscribers entertained, go ahead and subscribe to The Brilliantly Dumb Show on YouTube for more of this kitchen chaos. Enjoy the show folks.