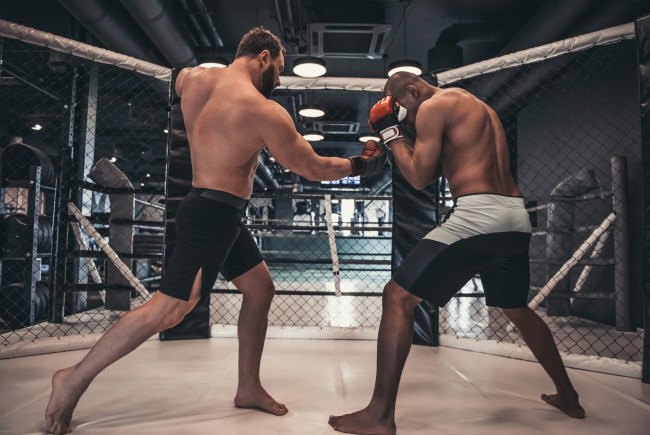 What’d you guys get up to this weekend? I played a bit of golf on Saturday, then met up with three pals and their sig-oths (significant others) for some eight-person role player games. Sunday was pretty chill. Bagels and lox in the morning before checking out some apartments all day long. Boy oh boy, were we tired!

But not as tired as we would have been had we participated in the 200-person “Rumble in the Bronx” fight club on Saturday night:

NY Times– More than 200 people stood shoulder to shoulder shouting as two men sparred at the center of a Bronx warehouse. Some people hung over the barricades, social media showed, craning their necks for a better view. When one man knocked out the other, the crowd erupted in a thunderous roar.

Sheriff’s deputies broke up the unlicensed fight club, known as “Rumble in the Bronx,” around 11:15 p.m. Saturday. Many of those crowding inside were drinking, smoking hookah and not wearing masks, the authorities said.

How do these things even come about? More importantly, why have I never caught even a whiff of these things? Back in my early twenties, I desperately wanted to attend one of those underground warehouse parties in Brooklyn. I never got the details and it haunts me to this day. Now, I’m putting Bronx Fight Club invite on my vision board.  I want to go. I want to be part of this. I need Bronx fight club in my life. Not now, necessarily, but once the vaccines are flying around like flu shots. If anyone knows the password or happens to receive the Paperless Post for these, please forward.

Jokes aside, this does sound WILD. It’s the world’s largest, most violent hookah lounge. Typically on hookah nights, you sit around on poufs, ottomans, and beanbags and read colorful, imaginative Lewis Carroll poems written on the walls in calligraphy. But the Bronx Fight Club flipped the game on its head. Instead of smoke rings, it’s makeshift boxing rings formed by a wall of people who push your body back out there for more punishment. The referee is the local butcher who really has NO ability to call it at the right time. And oh, in case the fight lasts more than a few rounds, you better hope you’ve done your cardio. Because that hookah smoke will get thicker and thicker the longer the fight wears on.

“I really hope COVID ends soon so we can go back to indoor brunch and Barry’s boot camp.” -Manhattan

“I really hope COVID ends soon so we can continue our underground fight club without paying $15,000 fines” -The Bronx