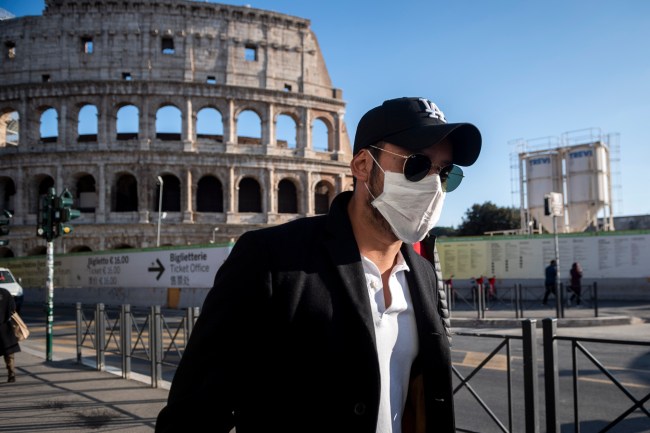 Coronavirus is changing pretty much everything we do in our normal lives, with people freaking out about going to work, traveling and, in general, just leaving their own apartments for fear that they’ll get the pandemic by being around other people. That’s not to make light of the situation, because, as somebody who is absolutely paranoid right now — especially given the amount of traveling I’ve done these past two weeks — we should all be making adjustments and taking precaution until more tests are available and information is released.

While we all anxiously wait to see how things play out with the coronavirus pandemic over the next few days, the situation over in Italy is even more extreme than what we’ve seen here in the U.S. — where more and more positive cases pop up, and things like the NBA season have gotten suspended. That’s because, with the entire country of Italy on lockdown, some people are actually trapped indoors with their dead loved ones’ bodies due to the quarantine, which sounds absolutely frightening, is disgusting and is all sorts of F’ed up.

The Washington Post detailed some of the madness that a few Italian residents are experiencing right now.

When his sister died after contracting the novel coronavirus, Luca Franzese thought that things couldn’t get much worse.

Then, for more than 36 hours, the Italian actor and mixed martial arts trainer was trapped at home with Teresa Franzese’s decaying body, unable to find a funeral home that would bury her.

“I have my sister in bed, dead, I don’t know what to do,” Franzese said in a Facebook video over the weekend, pleading for help. “I cannot give her the honor she deserves because the institutions have abandoned me. I contacted everyone, but nobody was able to give me an answer.”

Since Italian authorities have strict security measures in which to follow to help control the spreading of the coronavirus, it’s leaving residents in an obvious difficult predicament as they’re forced to stay inside. It’s why Franzese detailed his situation in a Facebook post that has since gone viral.

In videos posted to Facebook the following afternoon, Luca Franzese said his sister had been tested for the virus only after her death. The results came back positive, and he and several other relatives were placed under quarantine. That left a dilemma: What to do with Teresa’s body?

After various authorities failed to come up with an answer, Franzese said, the city of Naples finally referred him to a funeral home. But the funeral home refused, telling him it wasn’t equipped to deal with the situation.

“It was the first case in Italy in which a person with the virus dies at home, so there was some confusion on what to do,” Francesco Emilio Borrelli, a local councilor who also serves as a member of Campania’s Regional Health Commission, told Al Jazeera.

“We are ruined,” he said. “Italy has abandoned us.”

Some in Italy think they’re being “treated worse than garbage,” which, from the example above, it sure sounds like. But in a situation where the coronavirus pandemic continues to spread at a rapid pace — and, in Italy alone, a 24-hour span saw deaths rise from 196 to 827 — it’s unknown territory for everyone, which is causing all sorts of paranoia. Add in the fact that a coronavirus vaccine isn’t expected for the next year or so, it only adds to the stress.

We all need to take precautionary measures right now, and, as disgusting as it is to think living people are trapped inside a home with a dead loved one, until authorities and health officials have more information about this pandemic, things like this are unfortunately going to happen. It’s just a scary time in the world right now, so be safe out there.