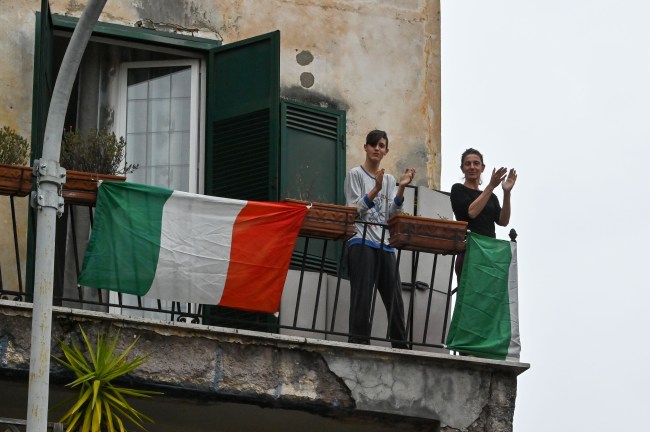 The coronavirus pandemic is an unprecedented warning for our entire world, forcing people to stay inside, practice social distancing, and try to help flatten the curve of positive cases. While we (hopefully) are all doing our part to avoid contact with other people in an attempt to stop this thing from spreading, we’ve got some people acting like morons and going about their lives as they normally would — looking at you, spring breakers.

While those partying down in Florida are, personally speaking, some of the worst types of people on planet earth when considering the circumstances we’re all in, there’s another guy who is pretty high up on that list. That’d be the man who reportedly had a secret affair and then contracted coronavirus while boning up his mistress over in Italy; yes, that’s something that really happened, guys.

According to The Sun, the man is an unidentified 30-year-old who secretly traveled to Italy for an affair, allegedly telling his wife that he was going overseas for work. With the entire country of Italy being on lockdown due to COVID-19 hitting harder than anywhere else in the world, the guy came back with a positive test — but still isn’t giving up the name of his mistress.

Insiders say the patient confessed to the affair while speaking to health officials, admitting he had told his unsuspecting wife he was on a business trip within the UK.

Upon his return home, the man reportedly began showing symptoms associated with the deadly virus. It wasn’t long before he took himself to the hospital, where tests confirmed he was positive. The Sun reports the man—who was described as “well-heeled and with a high-flying job”—refused to identify his mistress. And, from the sound of it, his wife still has no idea about the affair.

“His case would be funny if it wasn’t quite so serious … [his wife] thinks he just picked up the disease on his business trip away,” a source told the paper. “Although the patient admitted to medics what had happened, he said nothing would persuade him to name his mistress.”

This guy sounds like a real winner, doesn’t he? Not only has he been cheating on his wife, but after contracting the possibly deadly virus, he’s not willing to throw his mistress under the bus in an attempt to protect her. Literally, my mind is blown right now.

Although the guy tested positive for coronavirus, authorities do expect him to make a full recovery, saying he and his wife are self-quarantining themselves in their lavish house in the UK together.

“Despite his infection he is expected to survive the outbreak, unlike his extra-marital relationship,” the source said. “He thought he had the perfect alibi to carry out his affair, but hadn’t reckoned on the coronavirus meltdown. The patient is just relieved he got home before flights were canceled — that would have taken some explaining. He’s in a blind panic, but more about his adultery being exposed rather than his health.”

Can we all just do billions of people a favor and stay inside for the next couple weeks to try and limit the impact of the coronavirus, guys? I know it’s so much to ask to have a bunch more free time and hangout with your dogs while watching Netflix and half-assing work, but it’s kind of important to do right now — because being a complete idiot can wait till this all passes.