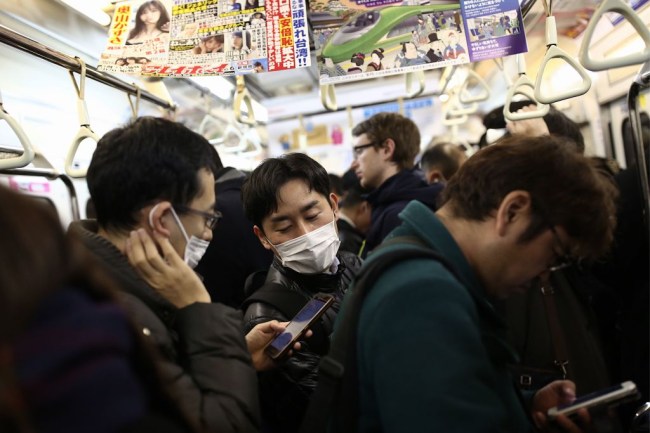 The coronavirus is in the news around the world because the respiratory disease has spread to at least 25 countries. While the lethal virus has infected 44,653 people in mainland China, and killed 1,113 others. There are some individuals who will attempt to make humor out of the outbreak. Internet pranksters tried to make comedy out of coronavirus by telling NYC subway passengers that they were transporting the deadly disease.

Two teens dressed in full hazmat suits and took a ride in the New York City subway on January 31. They held a large plastic vat with a red liquid inside and warning signs on the outside. Concerned riders on the L train were suspicious of the liquid.

“That better be Kool-Aid,” one passenger told the pranksters. Then the trolls opened the container, then “accidentally” dropped the canister on the floor of the subway car. The panicked straphangers ran away from the red wave of coronavirus. The pranksters admitted that the “coronavirus” was indeed red Kool-Aid. Which who knew coronavirus could be so delicious?

“Given the environment, putting on hazmat suits and getting on the subway and, frankly, walking the streets of New York is an irresponsible thing to do,” Foye said. “That kind of pranking during this particular point in time is offensive and could be dangerous.”

As far as pranks go, this isn’t necessarily the greatest prank. For one, why would these “medical professionals” be taking the subway? Why would the container holding such a lethal and easily transmittable disease be in such a leaky receptacle? They’re literally transporting COVID-19 in a plastic storage tote they just bought from Walmart. Why do the health workers not have their medical face masks over their noses?

There was no shortage of people who were very angry about the coronavirus prank. Some people said the pranksters should go to jail.

what the fuck is wrong with people pic.twitter.com/MFwBpsR6zJ

This has not been the first time that someone attempted a coronavirus prank. There was this one in a barbershop.

On a recent WestJet flight from Toronto to Jamaica, a 29-year-old man announced to all of the 243 passengers on the plane that he has the coronavirus. The man told everyone that he was recently in Hunan, China, where he contracted the deadly disease. Because of the confession, the commercial airplane was not permitted to land in Jamaica or the United States, and was forced to return to Toronto.

James Potok, who goes by the social media name of “Potok Philippe,” admitted it wa a coronavirus prank and issued an apology on YouTube.

There was another prankster who attempted to do a sneeze prank on unsuspecting people in stores, and many didn’t think it was funny. Some even threw fists after they were saturated by a spray bottle.

Doing Pranks In The Hood Is The Worst Idea😭🤣 Watch This!!😅 pic.twitter.com/Onh6evOESc

Karomat Dzhaborov, Russian prankster from Instagram and YouTube accounts “Kara.Prank,” did a coronavirus prank on subway cars in Moscow. Russian authorities have arrested him for his coronavirus prank video and he now faces up to five years in jail.

You should be prepared for consequences because there are people who are in fear of their lives over a prank or will take offense if you invade their space. Can’t you go do the lame broom challenge like everyone else?