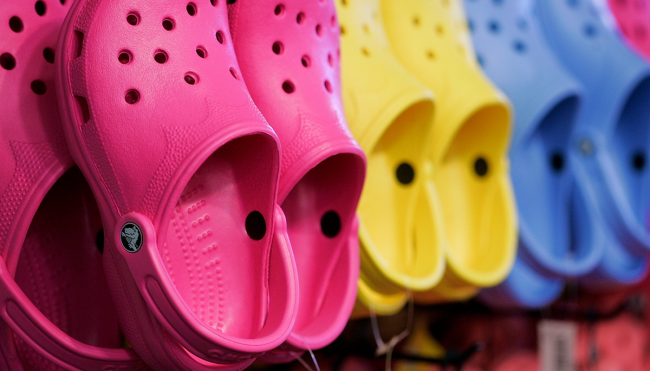 It’s rare for me to wander outside in New York City without throwing on the Unsolicited Conversation Deterrents more commonly referred to as “headphones.” However, I also rarely use them for their intended purpose, as I’ve learned that the random conversations you routinely overhear while roaming the streets can give the funniest podcasts out there a run for their money.

A couple of weeks ago, I was making my way down a sidewalk in Manhattan when I passed by the flagship store Crocs operates in the shadows of Macy’s. At the same moment, a prospective customer went to enter the massive shrine to ugly footwear only to be stopped by the security guard posted up outside its doors, who uttered the most unintentionally hilarious sequence of words I’ve ever heard when he said, “I’m sorry, sir. We’re full.”

While it might have been operating at limited capacity, I still can’t get over the fact that someone got treated like they were wearing Crocs while trying to get into a nightclub because enough people were shopping for the infamously gaudy shoes at 3:30 on a Thursday afternoon. However, it turns out that was only the tip of the iceberg.

According to CNN, it would appear Crocs are Having A Moment based on the numbers it showcased in a financial report on Tuesday. The company says it experienced a 64% boost in sales over the course of the first fiscal quarter and expects that yearly figure to reach upwards of 50% as it stock inches closer to the $100 after sitting at less than $25 last April.

A few years ago, Crocs suffered a pretty big blow when it was forced to distance itself from its most notable brand ambassador after Mario Batali got the #MeToo Treatment. However, that development may have been a blessing in disguise, as the company has done an incredible job reinventing itself thanks to collaborations with the likes of Post Malone and Justin Bieber as well as the fried chicken-scented monstrosities it created after teaming up with KFC.

I am personally very here for the Crocnaissance, which is just the latest piece of proof in a long line of evidence that suggests ugly is officially the new black—and all I can say is it’s about damn time.

Over the past year, a focus on comfort and practicality has taken precedence over caring about looking presentable, and I’ve been a vocal advocate of not abandoning that mentality as the world slowly inches toward normalcy. The style realm has largely transformed into a judgment-free zone and I think the world would be a better place if it stayed that way for a bit; let your cargo pants flag fly, dig those oversized JNCOs out of storage, and throw a fanny around your waist.

Remember: always be the change you want to see in the world.