How Is A $25 Peach Whiskey One Of The Most Sought-After Bottles In America? 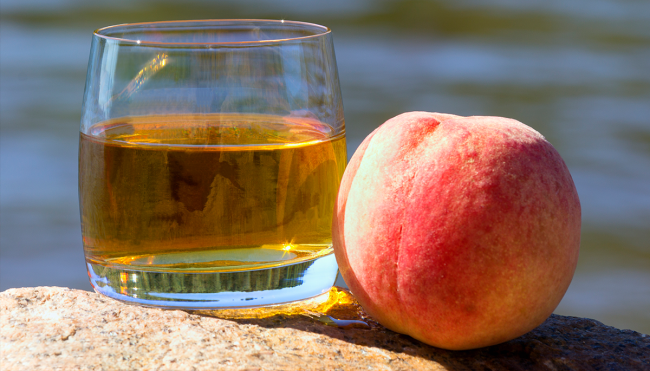 I like to think of myself as an Equal Opportunity Drinker. Sure, I’ve dropped more than I’d ever want to calculate on $15 cocktails and four-packs of uberhopped IPAs at craft breweries over the course of my life, but there aren’t many things I love more than posting up at a dive bar and milking a beer-and-a-shot special for all it’s worth.

That “EED” label also applies when it comes to whiskey. I usually have a couple of “nice” bottles I probably paid too much for on hand when I feel like treating myself, but my ideal Friday night involves sitting in my apartment with a few tallboys of Coors Banquet, a bottle of Mellow Corn, and a shot glass by my side.

If you keep tabs on what’s hot in the whiskey streets, you’re probably familiar with “whales” like Pappy Van Winkle, George T. Stagg, Blanton’s, and the other hard-to-find bottles that go for truly obscene prices on the secondary market. However, based on an excellent article Aaron Goldfarb recently wrote for VinePair, one of the most sought-after whiskeys in America has somehow flown beneath my (and basically every whiskey snob’s) radar: Crown Royal Peach.

We have the new Crown Royal PEACH! Come get it before it’s gone. pic.twitter.com/rh7tVESZ9x

Over the years, Crown Royal has conducted an absolute masterclass in marketing with the help of the trademark felt bag containing a fancy-looking bottle filled with a solid but largely unremarkable Canadian whisky. The brand began to branch out a bit last decade when it hopped on the flavored whiskey bandwagon by introducing variants of its flagship product including maple, apple, and vanilla in an attempt to lure in drinkers with a bit of a sweet tooth who might not be huge fans of its more standard fare.

In 2019, Crown Royal Peach was added to that lineup, and based on the investigation Goldfard conducted, the bottle that normally retails for around $25 not only managed to catch on but has amassed a following of loyal fans who have made it one of the hardest bottles to find in the United States.

I honestly thought the piece was a belated April Fools’ joke when I stumbled across it, but it turns out the hype is very, very real. He spoke with a number of liquor store workers around the country about the phenomenon—including one who claimed “I get more calls about it than I do for Pappy”—who said the 70-proof drink is almost impossible to keep in stock based on how quickly it flies off of the shelves.

Those claims were supported by the army of fans who’ve professed their love for the drink (and their dismay at their inability to find it,) and based on the many posts I came across on Twitter, it would appear a combination of the whisky and iced tea is an incredibly popular concoction.

When you drive to the liquor store in the snow but they sold out of crown Royal peach in 7 minutes pic.twitter.com/691t2zq4AT

While everyone stocks up on toilet paper, I’m stocking up on the necessities before they fly off the shelves!

The limited supply of Crown Royal Peach is already gone at the Giant Eagle in Alliance. pic.twitter.com/WuKcag8OeH

the nearest store with crown royal peach is 34 miles away… pic.twitter.com/rHKRN9oKKV

Sorry, we don’t have any Crown Royal Peach. pic.twitter.com/93ja4bjO0i

The demand is apparently so high that many stores have instituted a limit on the number of bottles their customers are allowed to buy (although you have to imagine the relatively low price point plays a factor in why so many of them want to stock up).