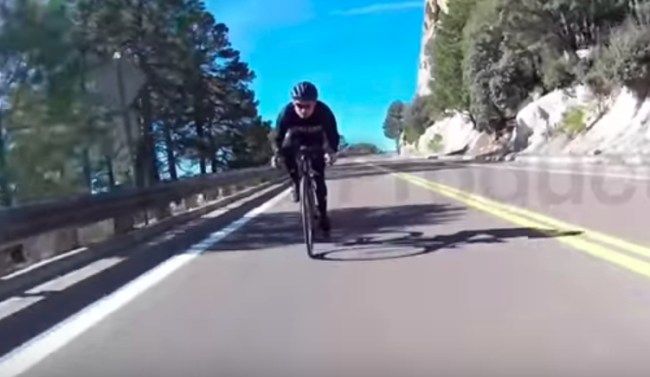 Cyclist Reed Soehnel is either the luckiest man in the world or the unluckiest.

Soehnel was cycling down Mount Lemmon with his cycling team in Tuscon, Arizona on Sunday morning when a stupid deer jumped into his path and upended him into the blue Arizona sky. The below video was captured by a rear camera attached to the bicycle of Reed’s training partner.

According to Tuscon.com, Reed totaled his bicycle, broke his foot, and suffered road rash, several bruises and cuts.

Fortunately, he didn’t have to call an ambulance because a group of women driving down the mountain from a bachelorette party stopped to help. One of them happened to be a neonatal intensive care unit nurse. Additionally, another cyclist who you can see at the end of the video riding in the opposite direction and narrowly avoiding getting drilled by the mangled bike, was an ICU nurse. Both of whom Reed described as extremely helpful.

“I was fully alert and (had) no concussion symptoms the entire time, so that’s why the decision was made to not involve an ambulance, although I was in a decent amount of pain,” Soehnel said in an email to Tuscon.com.

Miraculously, Reed was able  to drive himself back to Santa Fe the very next day and is expected to make a full recovery in 3-6 weeks.

As for the deer, that jumpy bastard lightly limped off with no apparent serious injuries.