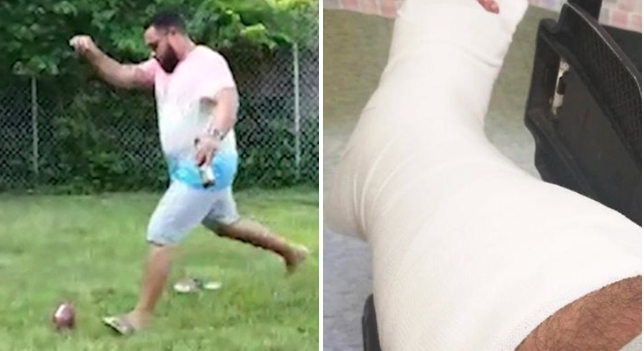 There are two types of people in this world: people who make gender reveal videos and everyone I associate with. I’m just kidding, I don’t have anything inherently against people who dilute a special moment with the trite pursuit to produce a #ViRaLmOmEnT, but I just think there’s too much that could go wrong.

In an increasing number of these gender reveal videos, what is supposed to be a moment filled with unbridled joy, is often overshadowed by a trivial malfunction in the gender reveal process.

Chris Ojeda of New Jersey can tell you about malfunction. Chris and his wife invited both their families over to dramatically reveal the gender of their second child. Keep in mind, it was Father’s Day and Chris’ birthday. Then this happened.

Chris broke his ankle and was put in a cast that ascended up to his knee, making the fact that he’s having a girl all but an afterthought.

Hey look on the bright side Chris. At least you took a cut at the ball.

Was walking to Wrigley and saw a gender reveal happening, so glad I stopped to film it 😂😂 pic.twitter.com/KjepDjFNre