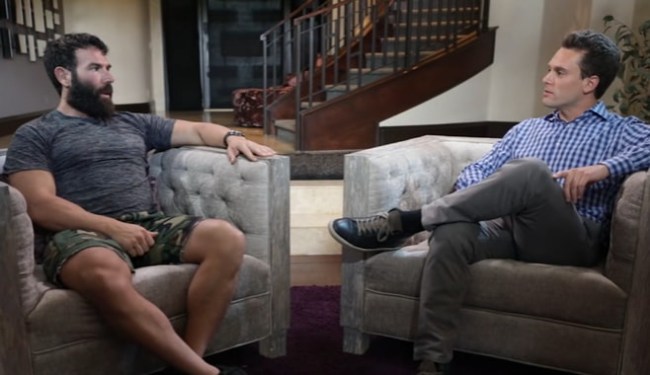 Dan Bilzerian is beloved, hated, and controversial. An insightful interview on “In Depth with Graham Bensinger” tried to peel the layers of the King of Instagram and figure out just who is Dan Bilzerian. Everything from the women who adore him to his trust fund wealth to his highly publicized poker career to President Trump to how he lost his virginity to aspirations of becoming a marijuana magnate and a substitute teacher were discussed in this lengthy interview.

Graham Bensinger inquired about Dan’s source of wealth and Bilzerian denied that he is only rich because his wealthy dad gave him millions from a trust fund.

Dan explained why his father, Paul Bilzerian, went to prison after a jury found the elder Bilzerian guilty on nine counts including conspiracy, making false statements, and securities and tax law violations.

Dan gives you a look into his upbringing explains how he went to jail for bringing a machine gun to school when he was a high school senior.

Here’s how the Instagram star went through SEAL training twice and was eventually kicked out.

Dan Bilzerian walks Graham through the four days of sleepless partying that led to two heart attacks and why surviving the trauma made him feel like a “bulletproof tiger.”

Bilzerian tells the story of how he had sex nine times in Cabo and how he lost his virginity in 8th grade to a prostitute in Mexico, and that he rarely seeks the company of sex workers.

Dan gives his opinions on relationships, monogamy, and marriage. He says most women appreciate his honesty, even when it’s not the answers they want to hear. These days, Dan does have a girlfriend.

Dan reveals what made him the “King of Instagram” and gives tips on how to get Instagram fame. He also reveals the moment in Cannes, France when he realized he’s more than just Instagram famous.

After four days of skiing and sleepless partying, Dan suffered two heart attacks. And how surviving the experience made him feel like a “bulletproof tiger.”

Dan tells the story of how he lost $6 million on a coin flip and lost. Plus, the reason why he didn’t bet $2 million on the Mayweather/McGregor fight.

Dan explains how he started playing poker after being in the military. But in his sophomore year of college he went broke after playing poker while drunk and trying to win every hand.

Dan the man reveals the most money he has won in one day, which was $12.8 million over three poker games.

Here’s the tale of Bilzerian making a $600,000 bet that he could cycle 300 miles from Las Vegas to Los Angeles in 48 hours. To do this insane feat, he sought the help of a pretty good bicyclist in Lance Armstrong.

He also says that his current lifestyle can’t last forever, he doesn’t play poker very much, and now is investigating ventures that are “fun businesses” such as the marijuana business. Bilzerian not only wants to get into the business of the legal marijuana, but be the “fucking Coca-Cola of the fucking weed industry.” He is working on a line of edibles that he expects to be tried, true, and trustworthy.

Dan reveals what his family feels about his playboy lifestyle. He would want to be a substitute teacher (If money wasn’t a factor).

Dan took Graham into the desert to do some Rambo shit.

Here’s a tour of Dan’s home and his diet.