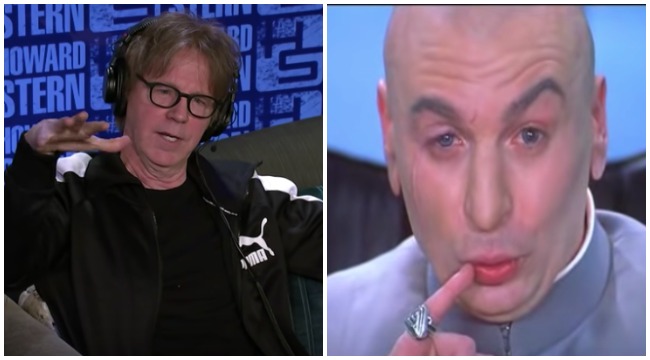 Mike Myers and Dana Carvey will be tied together for eternity as Wayne and Garth. The two SNL alums starred in one of the most beloved comedies of a generation and probably made more money from it than a rational man can spend. Not to mention, Wayne’s World also gifted us with Chris Farley’s movie debut and resurrected the career of Rob Lowe, who was down-and-out after an 1988 sex tape scandal.

Rumors of a divide between Myers and Carvey have been circulating for years, which was detailed most meticulously in a Vanity Fair exposé in 2000. On top of painting Myers out to be a viciously moody, controlling, arrogant, and a horror to work with (Wayne’s World director Penelope Spheeris confirmed this, calling him a “bastard”), the piece detailed a rift between the two comedians over Myers not wanting to be upstaged by Carvey, who at the time was a higher-profile comedy figure.

That rift was only exacerbated when Carvey felt slighted by Myer’s Dr. Evil character, a character largely based off an impression Carvey did of Saturday Night Live creator Lorne Michaels.

Carvey stopped by Howard Stern’s SiriusXM Satellite Radio program on Wednesday to discuss where he’s at with his resentment towards Myers.

Carvey claimed he was the first SNL castmember to do an impression of show’s creator, and even added the pinky as an unrelated personal touch.

Mind you, back in 2017, Myers admitted to Dr. Evil being inspired by Lorne Michaels, but never mentioned Carvey.

“The Dr. Evil voice is a little bit Lorne Michaels, there are no two ways about it, but there is a lot more Donald Pleasence in there than Lorne. Lorne has a pinky thing, but he doesn’t do it anymore,” Myers said then.

Carvey would go on to tell Stern that the two “never really talked about it,” before giving his Wayne’s World co-star due credit for mastering the character.

“I talked about it to the therapist,” he said. “There are a lot of moments in my life I wish I was more directly straightforward.” But, he also said, “I’ve basically let it go.”

“I have to say that the construct of Austin Powers was brilliant,” he said.

Help me decide if Dana Carvey had a right to be salty about this or he’s just being petty.