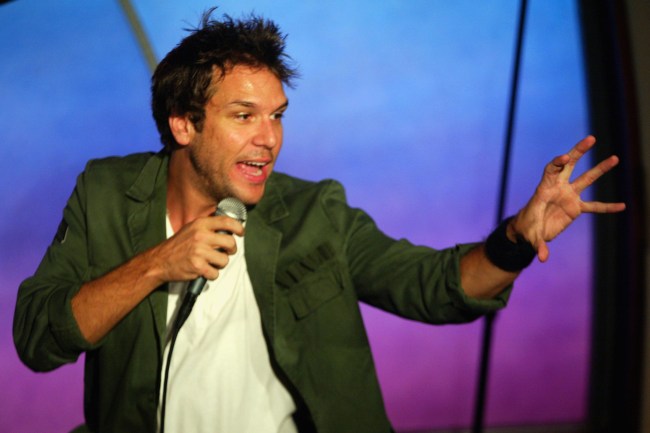 Today I learned that Dane Cook’s brother may be the biggest dirtbag in America.

Darryl McCauley, Cook’s half brother and former manager was sentenced to five years in prison in 2010 for systematically embezzling millions while working for the comedian. McCauley pleaded guilty to 27 counts of larceny over $250, three counts of forgery, embezzlement and a slew of other charges. The backstabbing became so shameless that at one point, McCauley flat-out wrote out a check for $3 million to himself from Cook’s account. McCauley, a former corrections officer (the irony), must also pay $12 million in frestitution to his brother and fork over ownership of numerous properties and business ventures in Massachusetts and Maine.

Cook, who has been quiet on the comedy scene since in recent years, is currently performing his first full-scale stand-up tour since 2013’s Under Oath. In promotion for the tour, which will make stops nationwide, the 47-year-old appeared on the Your Moms House Podcast with Tom Segura and Christina Pazsitzky.

The comedian told the story of how he plucked his brother from a low-paying gig in the 90s to become his manager, only to have he and his wife stack his money in their walls. This was some of the best 10 minutes of radio I’ve heard in a while.

Only five years in prison for this crime? If you’re willing stack $800,000 in a wall from your own brother, your moral compass is so shattered that you should not be allowed back into normal people society. Throw away the key and add a form of torture by blasting a Dane Cook special in his cell 24 hours a day. It’s still cool to hate on Dane Cook, right? Fuck that, the corn-on-the-cob bit was some of the funniest shit I’ve ever heard in my life. Put respect on Dane Cook’s name.