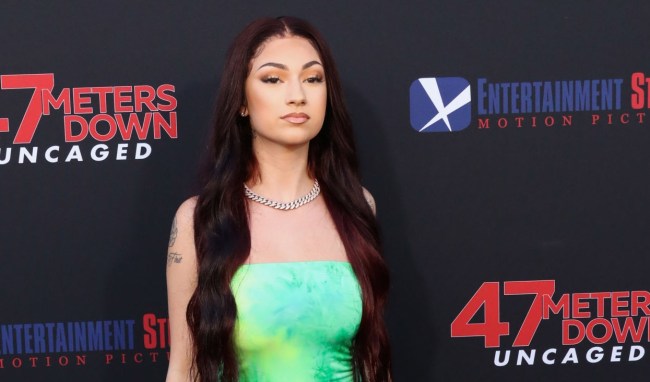 Only in America can a 13-year-old girl, in this case one Danielle Bregoli, AKA Bhad Bhabie, go on a TV show, act like a petulant brat, go viral for her nonsensical catch phrase (“Cash me ousside, how bow dah?”), go on tour, ink an $900,000 endorsement deal, sign a multi-million dollar record deal, sign a million dollar songwriting deal, get a $100k advance to promote a mobile game, and launch a Snapchat original series which had more than 10 million unique views in the 24 hours after it debuted.

And only in America can this same girl, now 16-years-old, get into a beef on social media with the stans of 36-year-old 10-time Grammy nominee Nicki Minaj.

Bregoli achieved this latest feat during a recent Instagram Live video where she tried to explain how hard the music industry is and how others are able to succeed. Seriously, she was giving out advice on this subject.

“Y’all just don’t understand how this industry works,” Bregoli explained to her fans. “It’s so sad. It’s so upsetting because people put a lot of work into getting things done and then y’all hear, ‘Oh, she didn’t write that hook? Oh, well f**k her.’ What? Y’all know most of the biggest… Drake, Nicki. All them people get sh*t written for them, too. Wayne. Like, all types of people get sh*t written. Whether they actually gonna use it or not, sh*t still gets written. Even sometimes in sessions artists will talk to they friends [to get advice]. That’s how sh*t gets done. Sometimes it’s a team effort.”

If that sounds like Bhad Bhabie was saying artists like Drake, Lil Wayne, and Nicki Minaj don’t write their own songs, you’re not alone. The Barbz also took it that way, which is, as has been well-chronicled, a big mistake.

An hour or so after she started being attacked on social media, according to Complex, for daring to question The Harajuku Barbie, Bregoli returned to Instagram Live to issue a response, clarifying herself, and, of course, directly insulting Minaj’s fans along the way.

Enjoy both videos below…