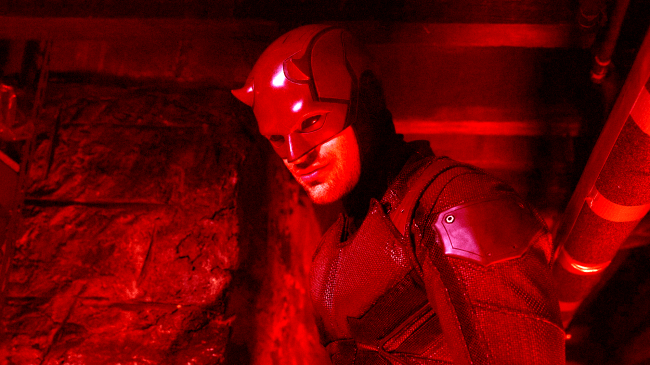 This week, all of the Marvel shows in the Defenders universe were officially transferred from Netflix to Disney Plus. Also making the move this week to Disney Plus is Agents of Shield.

The Netflix shows, including Daredevil, Jessica Jones, Luke Cage, Iron Fist, The Punisher, and The Defenders, were all unceremoniously canceled despite fan outcry in 2018 and 2019.

Fans of the shows expected they would never see them again, but with the addition of Disney Plus to the streaming world their hopes got a little bit higher.

Now, according to new reports, claims that the OG show, Daredevil, will be shooting again sometime this year.

The evidence of this comes in the form of a new Disney-owned business entity discovered by Murphy’s Multiverse called Blind Faith Productions LLC.

On top of that, ComicBook.com reports that the latest issue of Production Weekly has a listing for a “Daredevil Reboot” with Kevin Feige and Chris Gray as the show’s producers.

Throw in the fact that the former Editor-in-Chief of GWW.com, KC Walsh, reporting that the show will either begin filming by the end of the year, or at some point in 2023, and fans might actually get Matt Murdock back in more than a Spider-Man movie cameo.

BREAKING: The fourth season of #Daredevil will begin to filming at the end of 2022! pic.twitter.com/SRHuxVCRDp

Charlie Cox and Vincent D’Onofrio, who have reappeared as their Daredevil characters in Marvel properties recently, are both still quite down to continue playing Daredevil and Kingpin.

“I think at this point, I expect to be involved in some capacity,” Cox told HeyUGuys. “Otherwise, it would be a bit of a weird one scene moment. I don’t know much, I know a little, and what I do know I’m very excited about…there’s a chance it could be the next ten years of my life.”

D’Onofrio told Collider after Kingpin’s appearance on Hawkeye, “[When] walked away from Daredevil, at first I thought, “Maybe he’ll come back somehow.” And then very quickly after that, I thought I was walking away for good. So I had always hoped because of the fans wanting him back and everybody, I’d hope that I would come back. So I feel the same way now.”

Fans, needless to say, are very excited at the prospect of Daredevil finally getting a season four.

This man needs to be in there pic.twitter.com/1iNdaw1PAr

For what it’s worth, Charlie Cox recently said at Abu Dhabi’s Middle East Film and Comic Con he hopes a reboot would not pick up right where season three ended.

“In keeping with a lot of things in the MCU. It’s a good moment to have a few years [pass],” he said. “It’s reimagined. It’s slightly different. It’s ‘born again.'”

Coincidentally, Cox also told ComicBook.com, “I’m just buzzing that it’s kind of happening again, it’s starting up again. And I don’t know where it’s going, I don’t know how much involvement I’m going to have, I don’t know what it’s leading to, but it feels like we’re born again.”

He knows more than he’s telling us, right?