Dave Bautista Confirms ‘Avengers 4’ Theory, Wants A Drax Solo Movie, But May Not Return For ‘Guardians 3’ 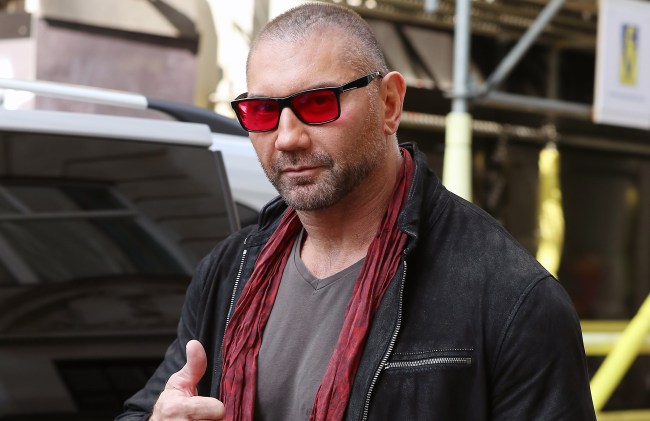 Somewhat lost amid all the hype and hoopla surrounding Avengers: Infinity War, Ant-Man and the Wasp, and Captain Marvel, is the fact that, for fans of Marvel movies, there is a very real concern about the fate of a third Guardians of the Galaxy movie.

With the dismissal of the first two Guardians film’s director James Gunn, there is a tremendous amount of uncertainty whether a third film will ever be made. (And no, Gunn is not going to be re-hired.)

In fact, Dave Bautista, who plays the lovable lug Drax, told Digital Spy recently, “It’s kind of a strange situation to be in now where we’ve lost our director for Guardians. Guardians 3 is really up in the air and I don’t know what they’re going to do with it. It’s on permanent hold for now, and that may make a difference in what they do with our characters in Avengers 4. To be honest with you, right now I really don’t know. But I know I’m in Avengers 4. I’ve shot most of it already. I do have two days of reshoots. But other than that, I have some really great scenes that I hope they use. But I guess that it remains to be seen what they’ll do with the characters.”

Oh, was he not supposed to mention that last part? Whoops.

Regarding that, Bautista told Good Morning Britain, “We definitely see more Guardians in the upcoming Avengers, which we’ve already shot. Oddly enough, I guess I wasn’t supposed to say anything, but I was already saying before Avengers 3 was released that I had already filmed and I was signed up for Guardians 3. So I must come back somehow. It’s comforting, but at the same time I felt a sense of guilt because I don’t know if I was supposed to say anything. And nobody told me not to say anything.”

Then again, Bautista isn’t even sure he wants to come back for another Guardians movie, saying on The Jonathan Ross Show, “To be honest with you I don’t know if I want to work for Disney.”

On the flip side, Bautista did say that he was hoping to see Marvel make a standalone Drax movie, whether he plays the character or not, telling MTV International, “I think it’s a beautiful story and I think it’s been lost and overlooked a little bit. It’s a beautiful and heartbreaking emotional thing to know where that love for his family and that heartbreak over his family being lost and murdered, where it comes from I think. I really pushed and fought for the Drax standalone film but I don’t think it’s ever going to happen. I really wish they would because I think there’s a story to be told there and I think the fans would really love to see that story, even if it’s not me portraying Drax, I just think it is an interesting story to tell.”

What do you think? Would there be enough interest in a solo Drax movie? Would you go see it? Will Guardians 3 ever get made? And with what cast? So many questions.

Related…
• ‘Avengers: Infinity War’ Director Finally Reveals The Reason Bruce Banner Couldn’t Hulk Out
• We May Finally Know Why Drax Thought Being ‘Incredibly Still’ Makes Him Invisible In ‘Infinity War’
• Could Killmonger Have Taken Thanos Down? Michael B. Jordan Thinks So And Details Why