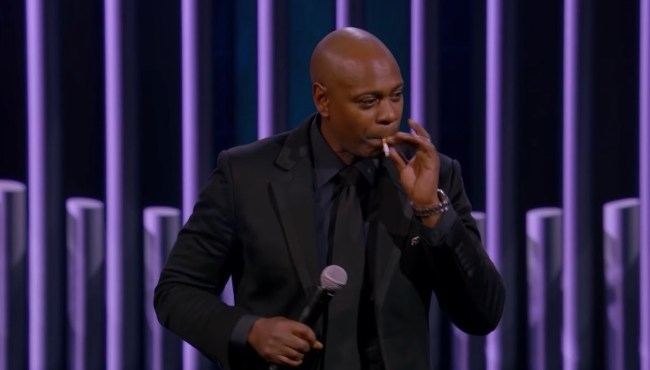 If you’re around the same age as me (1993 stand up!), then odds are, Dave Chappelle ranks near the top of your favorite stand-up comedians of all-time.

Thanks to the everlasting power of Chappelle’s Show, Dave Chappelle was the first comedian that caused me to stop and think about what he was actually saying. I mean, fucking hell, the first episode of Chappelle’s Show featured Clayton Bigsby, a black white supremacist. As a young boy entering his teenage years, Chappelle presented me with topics I’d never previously considered in ways that I could understand.

Towards the end of last year, Chappelle’s generational talent was awarded when he was named the recipient of the 2019 Mark Twain Prize, which is meant to recognize him as “one of the world’s great humorists.”

An outstanding lineup of entertainers gathered in the Kennedy Center Concert Hall to salute Dave Chappelle, recipient of the 22nd annual Mark Twain Prize for American Humor on October 27, 2019. The Prize, which is named to honor one of the world’s greatest humorists, was given at a gala performance featuring some of the biggest names in comedy.

While the ceremony was held in late October, it only aired on PBS last night, finally giving fans a look at what his colleagues — such as Jon Stewart, Aziz Ansari, and Sarah Silverman — had to say about him, and of course, what he had to say about them.

Below, you can find acclaimed stand-ups such as Neal Brennan, Sarah Silverman, Tiffany Haddish, and Jon Stewart pay their respects to the beloved Chappelle’s Show creator (Brennan’s clip is especially worth the watch as he tells a hilarious anecdote about the making of Half Baked).

You can also watch the full ceremony for free over at PBS (which is also very worth it, considering it starts with Morgan Freeman screaming “let’s go fucking crazy!” into the microphone.)