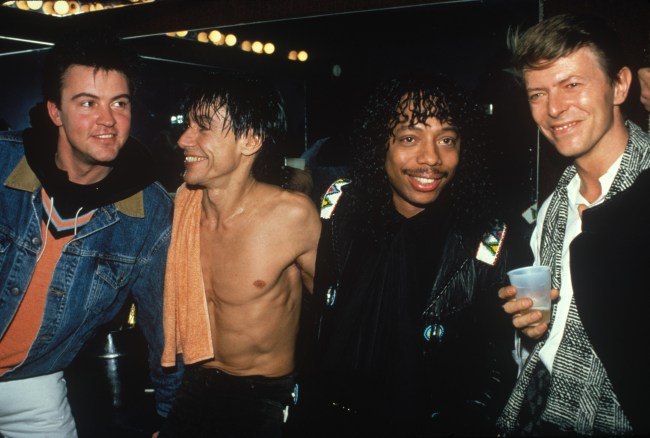 Iggy Pop has been clean for decades, but before he ventured down the straight and narrow path he was known for his unsatiable drug addiction. One legendary story punctuates Iggy’s unquenchable thirst for drugs, and has since been etched in rock and roll lore.

The year was 1974, and Iggy was the frontman for one of the very first punk bands on the planet – The Stooges. Iggy Pop, previously named James Newell Osterberg Jr., was performing in January 1974 at the Michigan Palace in Detroit. It would become the final performance of The Stooges after the audience became hostile towards Iggy, and threw eggs and lightbulbs at the band.

From the Paleolithic Hunting Club:

“The audience, which consisted largely of bikers, was unusually hostile, and Iggy, as usual, fed on that hostility, soaked it up and gave it back and absorbed it all over again in an eerie, frightening symbiosis. ‘All right,’ he finally said, stopping a song in the middle, ‘You assholes wanta hear Louie Louie, we’ll give you Louie Louie,’ including new lyrics improvised by the Pop on the spot consisting of “You can suck my ass.”

One heckler in the crowd irritated Iggy Pop to they point that he stopped the concert to address him personally, “Listen, asshole, you heckle one more time and I’m gonna come down there and kick your ass.”

The rowdy concertgoer responded, “F*ck you, you little punk.”

Iggy jumped off the stage and physically engaged the biker, who in turn allegedly “beat the sh*t out of him” to the point of him needing medical attention. This ended the concert and The Stooges.

The hostilities between Iggy Pop and the bikers are caught on the live album titled Metallic K.O.

The Stooges broke up immediately following the violent concert. The band’s breakup caused Iggy to go on a drug extravaganza.

“By 1975, I was totally into drugs, and my willpower had been vastly depleted,” Pop said. “But still, I had the brains to commit myself to a hospital, and I survived with willpower and a lot of help from David Bowie. I survived because I wanted to.”

Iggy was arrested several times for misdemeanors, and a judge gave the rockstar a choice of going to rehab or going to jail. Pop decided to go to rehab.

He checked himself into a mental institution, and tried to get sober at the UCLA Neuropsychiatric Institute.

“His doctor at the facility, Dr. Murry Zucker, shared this on what he thinks might make up the frenetic brain of Iggy Pop: “I always got the feeling [Iggy] enjoyed his brain so much he would play with it to the point of himself not knowing what was up and what was down,” he commented,” Far Out Magazine reported. “At times, he seemed to have complete control of turning this on and that on, playing with different personas, out-Bowie-ing David Bowie, as a display of the range of his brain. But then at other times, you get the feeling he wasn’t in control – he was just bouncing around with it. It wasn’t just lack of discipline; it wasn’t necessarily bipolar, it was God knows what.” Iggy was not in a good shape and was clearly swept up in the glamor of rock and roll. It also appears so was everybody else, with nobody’s story exactly straight.”

The proto-punk rocker got some celebrity visitors. Over the years, Iggy had found a close friend in fellow musician David Bowie, who also enjoyed partaking in recreational drug use.

“If I remember it right, it was me and Dennis Hopper. We trooped into the hospital with a load of drugs for him,” Bowie told Bender in a 2002 interview. “This was very much a leave-your-drugs-at-the-door hospital. We were out of our minds, all of us. He wasn’t well; that’s all we knew. We thought we should bring him some drugs because he probably hadn’t had any for days!”

Bowie allegedly smuggled the drugs into the psych ward with the help of Easy Rider legend Dennis Hopper and/or extremely popular actor Dean Stockwell. The motley crew were purportedly dressed up in space suits, completely stoned, and yelling: “We want to see Jimmy. Let us in!”

Bowie said that he remembers to have the coke being confiscated at the entrance following a pat-down; however Pop believes that the smugglers were able to bring in the drugs without incident.

In a 1990 MTV interview, Iggy said that David Bowie saved his life by giving him two pieces of advice: Move out of Los Angeles and make an album with him.

RELATED: Ozzy Osbourne Says He Felt ‘Calmest’ In His Life When Trying To Kill Wife Sharon By Strangling Her