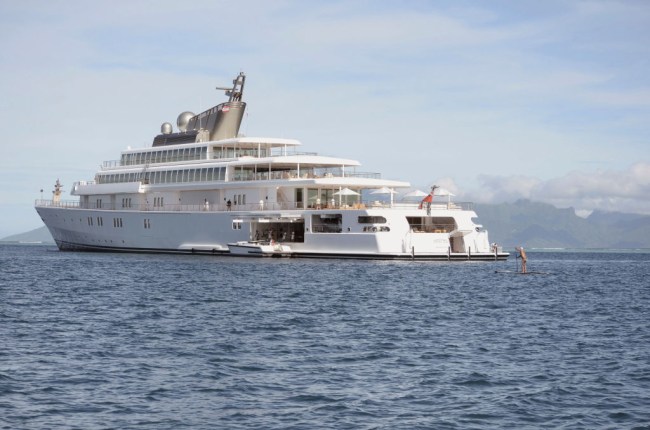 Are you going a bit stir-crazy as you attempt to maintain your sanity as you self-quarantine in a 490-square-foot studio apartment as your neighbor above you does burpees every morning at 6 AM? But, have you considered how billionaire David Geffen is doing during these turbulent times? No? Me either. However, David Geffen provided an update on his isolation, and it was as tone-deaf as anything you’ve ever seen.

David Geffen is vacationing, err, I mean “isolating” in the Grenadines on his yacht. Geffen, who has a net worth of $7.7 billion, inexplicably posted several photos of his grueling quarantine on his yacht. But this is just not any yacht. This is a 454-foot megayacht, which was originally built for Oracle founder Larry Ellison, that Geffen purchased in 2010 for $590 million.

The superyacht can comfortably accommodate 18 guests and a staff of 55 people. It has a basketball court and a pool. Geffen is really roughing it.

Two days after a record 3.3 million Americans filed for unemployment, Geffen posted several photos of his megayacht on his Instagram with the completely tone-deaf caption: “Sunset last night… isolated in the Grenadines avoiding the virus. I’m hoping everyone is staying safe.”

Thanks, David Geffen, for your thoughts. pic.twitter.com/5XTRhGX5OP

There’s a harmless humblebrag, and then there is flaunting your unbelievable wealth as the world attempts to deal with the current health crisis and giving the middle finger to everyone struggling right now, especially the millions who have lost their jobs.

What might be the worst part is that this photoshoot was planned. The captain had to position the mega-yacht in front of the Caribbean island in the background just as the sun was setting, and then they had to launch a drone to take the photo. HE HAS A DRONE SPECIFICALLY FOR YACHT SELFIES!!!

David Geffen’s Instagram photos are motivating people to form their own gang of pirates like the Smokers from Waterworld. All rich people have to do is quietly sit in their mansions and yachts while donating some wealth to charities of people affected by the crisis, and they just fucking can’t do it.

RELATED: TikTok Influencer Says He Is In The Hospital Days After Licking A Toilet

The Twitter reactions to Geffen bragging about “isolating” on his mega-yacht were harsh, yet fair.

If the third season of Succession doesn't include at least one episode of the family self-isolating on its yacht like David Geffen, I'll be disappointed.

I now understand why Neil Young, Glenn Frey, and so many other musicians hated working with David Geffen and being on his label. . .

You poor plebs can suck it.
It's fabulous to be rich.
Look at me!
h/t @litcapital pic.twitter.com/q1hELQa3H3

Geffen has since locked his Instagram and made it private. What happened? He must be getting social media engagement on his Instagram?

Everyone: “I’m eating expired Spaghettios with PBR as I binge-watch every episode of 90 Day Fiance in my studio apartment in an effort to help flatten the curve.”

Celebrities and wealthy people, for your own good, flush your phone down the toilet so that you won’t post these ignorant things during this life-threatening emergency.