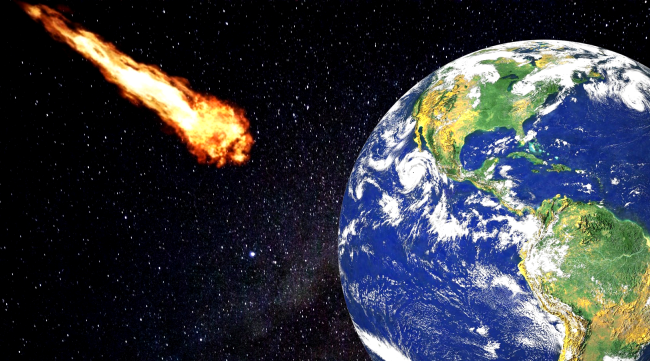 Little did anyone know, but back in 2014 Earth had its first known interstellar visitor.

According to newly declassified United States Department of Defense documents, a fireball that appeared over Papua New Guinea in 2014 was actually a space rock from a completely different solar system.

This first known interstellar object to hit our planet crashed into the South Pacific Ocean on Jan. 8, 2014 after flying through space at 130,000 mph, according to a 2019 study of the object published in the preprint server arXiv.

That very high rate of speed was one of the factors that scientists used in assessing the space rock’s origin as it was moving significantly faster than the average velocity of meteors normally found in our solar system.

Amir Siraj, a student pursuing astrophysics at Harvard who led the research, said the study has been awaiting peer review and publication for years, but has been hamstrung by the odd circumstances that arose from the sheer novelty of the find and roadblocks put up by the involvement of information classified by the U.S. government.

The discovery of the meteor, which measured just a few feet wide, follows recent detections of two other interstellar objects in our solar system, known as ‘Oumuamua and Comet Borisov, that were much larger and did not come into close contact with Earth.

6/ “I had the pleasure of signing a memo with @ussfspoc’s Chief Scientist, Dr. Mozer, to confirm that a previously-detected interstellar object was indeed an interstellar object, a confirmation that assisted the broader astronomical community.” pic.twitter.com/PGlIOnCSrW

“I get a kick out of just thinking about the fact that we have interstellar material that was delivered to Earth, and we know where it is,” Siraj, the Director of Interstellar Object Studies at Harvard’s Galileo Project, told Vice. “One thing that I’m going to be checking — and I’m already talking to people about — is whether it is possible to search the ocean floor off the coast of Papua New Guinea and see if we can get any fragments.”

While finding those fragments is highly unlikely considering where the rock hit Earth – the ocean – Siraj is still hopeful.

“It would be a big undertaking, but we’re going to look at it in extreme depth because the possibility of getting the first piece of interstellar material is exciting enough to check this very thoroughly and talk to all the world experts on ocean expeditions to recover meteorites,” he said.

Siraj and study co-author Avi Loeb could possibly have made this data public before now, were it not for interference from the U.S. Department of Defense.

Some of the sensors that detect fireballs are operated by the U.S. Department of Defense, which uses the same technologies to monitor the skies for nuclear detonations. As a result, Siraj and Loeb couldn’t directly confirm the margin of error on the fireball’s velocity.

The secret data threw the paper into limbo as the researchers sought to get confirmation from the U.S. government. Siraj called the multi-year process a “whole saga” as they navigated a bureaucratic labyrinth that wound its way though Los Alamos National Laboratory, NASA, and other governmental arms, before ultimately landing at the desk of Joel Mozer, Chief Scientist of Space Operations Command at the U.S. Space Force service component of USSC.

This discovery indicates that there may be even more interstellar material already in our solar system that could give us greater insight into galaxies other than ours. We just have to find it.

“Given how infrequent interstellar meteors are, extra-galactic meteors are going to be even rarer,” Siraj added. “But the fact of the matter is, going forward, we won’t find anything unless we look for it. We might as well take it upon ourselves as scientists to build a network as extensive as the U.S government’s sensor network, and use it for the purposes of science and fully use the atmosphere.”