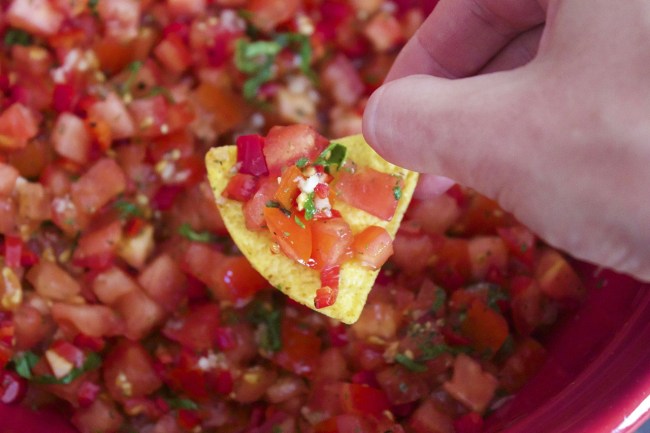 A man dipped his testicles in salsa after a small tip. No, not that kind of tip, we’re talking about the money given for services rendered kind of tip.

Howard Matthew Webb allegedly put both of his testicles in a container of salsa before it was delivered to a customer last month. Apparently, the customer gave a very cheap gratuity on a previous delivery and Webb was out for a ballsy revenge by teabagging the salsa.

The salsa was ordered from a Mexican restaurant and delivered by independent contractor Dinner Delivered, which is an online meal-ordering service. Webb was not the delivery person but a passenger in the car. The female employee of Dinner Delivered worked at the delivery service since November, but she was sacked for her involvement in the ball-dipping incident.

RELATED: Woman Demands Police Investigation And $500 DNA Test On Her Roommates After One Of Them Stole Her Yogurt

Authorities only know about the ball-dipping act because there is a video of him putting his testicles in the salsa. “This is what you get when you give an 89 cents tip for an almost 30-minute drive,” Webb is heard saying in the 14-second video. “Oh, oh, it feels good,” Webb also said of contaminating the twangy salsa with his bollocks. You could say the salsa is literally and figuratively tainted. Let’s hope that he didn’t double-dip.

Let's pray that the customer doesn't have a nut allergy… https://t.co/m3SSyqbZJV

“This salsa tastes funky, what ingredients are in it?”

Webb was arrested by Maryland police on Friday and was charged “adulteration of food, liquids or pharmaceuticals,” a Class C felony. As of Wednesday, Webb remained in jail on $45,000 bond. Webb could face a sentence of three to 15 years in prison and a fine of up to $10,000.

One could imagine that the man could try to run with the George Costanza defense for adding his own ballandaise sauce.

Maybe this delivery guy is just a huge fan of the mid-90s sketch comedy The State that starred Ken Marino as Louie, who had the catchphrase of “I wanna dip my balls in it!”