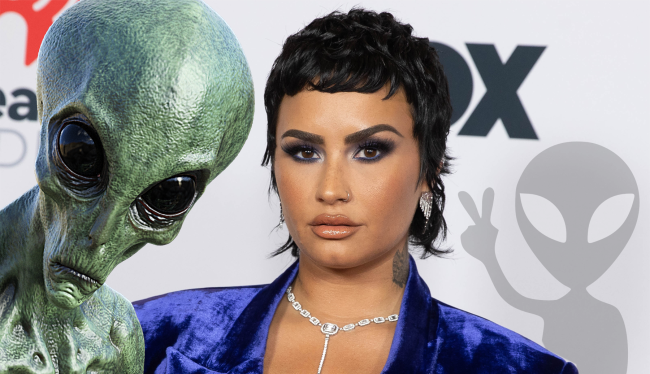 Demi Lovato is once again is talking about her encounters with aliens, discussing the “beautiful and incredible experience” with aliens while in the desert in Joshua Tree as she is out promoting her new show on Peacock, Unidentified With Demi Lovato.

“We went out into the desert in Joshua Tree and I basically saw this blue orb that was about 50 feet away, maybe less, and it was kind of like floating above the ground, just like 10 or 15 feet, and it was kind of keeping its distance from me,” Lovato recently told E! News. “It was a beautiful and incredible experience.”

Lovato says the experience “definitely changed the way that you see the world. You have an inkling and then all of a sudden that inkling is confirmed. It changes your reality, for sure.”

In a separate interview with E! News, Lovato said, “I had a pretty profound experience on my 28th birthday. I made [alien] contact, and it was a pretty mind-blowing experience. Ever since then, I started to look into this more and I wanted to do a show about it.”

Explaining her first encounter with aliens, Lovato revealed, “We were stargazing and we tried to do this protocol where you make contact, and all of a sudden something showed up directly above us in the sky. It was huge lights that made a question mark, almost, in the sky — and then it just like backed out. I realized [then] that my life was probably going to change in a spiritual way, because I have a spiritual connection to this journey as well.”

“I think they’re very caring, very intelligent beings that are just looking out for the best interest of our planet, because we need some help. If you notice in the back in the ’40s, UFO sighting really started, and that was because, I believe, that was when we split the atom. We developed nuclear weapons. I think that they’re here. I think that they’re living among us and we don’t even realize it. I don’t think that the traveling light years to get here; some beings are already actually living among us.”

Related: Miley Cyrus Says She Once Made Eye Contact With An Alien Inside A UFO

On her new show, which premieres Thursday, Sept. 30 with an initial four episode run, Lovato says there was one time where they “made contact for about two hours.”

“I think it’s about intention, and when you put the intention out there, sometimes they come,” said Lovato.