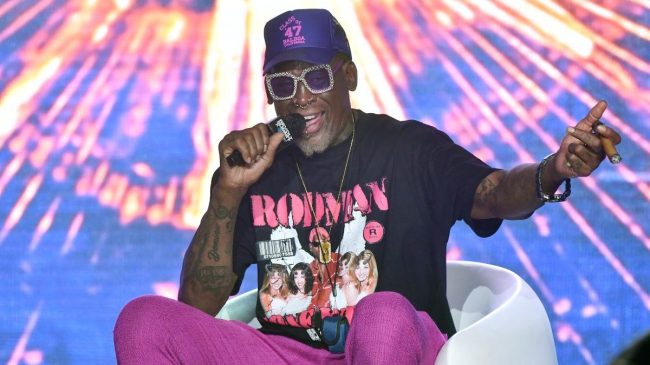 There’s never a dull moment in the life of Basketball Hall of Famer Dennis Rodman. But one incident, in particular, will live on in basketball legend forever.

That moment is Rodman’s infamous 48-hour bender in Las Vegas in the middle of the 1998 NBA season with the Chicago Bulls.

As the story goes, Rodman had requested a 48-hour leave of absence from the Bulls. Coach Phil Jackson approved the trip. Rodman then took the opportunity to take a trip to Las Vegas with his then-girlfriend Carmen Electra. But the wild trip went well beyond the 48 hours that Jackson allotted.

Jackson and Michael Jordan then flew to Las Vegas to retrieve Rodman and, as the story goes, walked in Rodman and Electra in their hotel room to drag the superstar forward back to Chicago.

Now that story is being immortalized in film, and Lionsgate has attracted one of the biggest actors in all of Hollywood to play Rodman.

Justin Kroll of Deadline reports that Lionsgate is in early talks with Lovecraft Country and Marvel Cinematic Universe star Jonathan Majors to play the role of Rodman in the movie.

Lionsgate’s highly-anticipated film centered on Dennis Rodman’s 48 hours in Vegas during the 1998 NBA finals may have zeroed in on the actor who will portray the infamous basketball star. Sources tell deadline, that Jonathan Majors is in early talks to play Rodman aka “the Worm” in 48 Hours in Vegas. While a deal isn’t closed, sources say Majors is very much on board and negotiations are headed in the right direction. Lionsgate won the rights to the spec in a highly competitive auction last August with Phil Lord, Chris Miller and Aditya Sood producing the film. Ari Lubet, Will Allegra and Rodman will executive produce.

Majors skyrocketed to Hollywood stardom in recent years. He burst onto the scene after starring in The Last Black Man In San Francisco in 2019. His reputation has only continued to grow from there.

He then starred as Atticus Finch in HBO’s Lovecraft Country. Majors also plays Kang the Conquerer in a number of Marvel Cinematic Universe shows and films.

Rodman is still a megastar in his own right. He caused controversy recently with plans to travel to Russia to negotiate on behalf of Brittney Griner. Though that trip never took place. Shaquille O’Neal also recently named Rodman his worst teammate of all time.

Again, there’s never a dull moment in the life of Dennis Rodman.