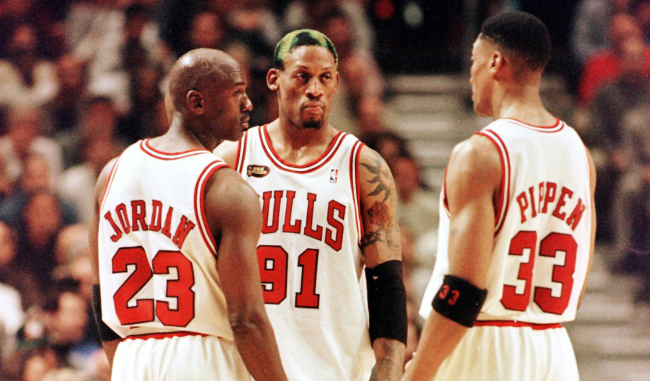 During the airing of the ESPN docuseries The Last Dance, many NBA fans learned all sorts of things they never knew about the legendary Chicago Bulls teams of the 1990s, many involving the team’s big three of Michael Jordan, Scottie Pippen, and Dennis Rodman.

In addition to a plethora of stories surrounding the team’s leader Michael Jordan, fans were also treated to numerous interviews with and stories about numerous other key figures in the Bulls’ run.

Among those many important people during the Bulls second run at a three-peat was, of course, Dennis Rodman.

As pretty much every NBA fan knows, Rodman marched to the beat of his own drum back in his playing days (and beyond). He was one of the fiercest defenders and rebounders the league has ever seen, but he was also just as dogged off the court when it came to partying.

One of the craziest stories surrounding Dennis Rodman’s penchant for straying off the beaten path occurred when the Hall of Famer decided to take a trip to Las Vegas… in the middle of the 1998 NBA Finals.

Unless if a person lived through the 90s, it's hard to comprehend what Dennis Rodman was in his prime. Outlandish and talented. One example… He showed up to wrasslin' instead of practice during the 1998 NBA Championship Finals.#TheLastDance pic.twitter.com/yB5wRf8asc

Related: Carmen Electra Tells Story Of How She Hid From Michael Jordan When He Stormed Into Dennis Rodman’s Vegas Hotel Room

Now, that little jaunt to Sin City is being made into a feature film called 48 Hours in Vegas.

Deadline reports that the film will be produced by Phil Lord, Chris Miller and Aditya Sood for Lord Miller (21 Jump Street, The Lego Movie, The Mitchells vs. The Machines). Ari Lubet, Will Allegra and Rodman will executive produce. The screenplay will be written by Jordan VanDina (The Binge).

“There’s only one Dennis Rodman. In 1998, there was nobody on Earth who’d be more fun – or maybe more dangerous – to party with. And yet that’s not even half of who he is,” said Nathan Kahane, president of Lionsgate’s Motion Picture Group. “This movie takes you on an unforgettable ride with the myth, the legend, and also the man that Dennis is, behind everything you think you know. We could not be more thrilled to be working with Phil, Chris, Aditya, Ari, Will, and Jordan, and above all, Dennis, whose amazing career and life will make for an off-the-wall hilarious yet completely human and emotional movie. You think you know anything about ’The Worm’? Just you wait!”

“Dennis refused to follow the herd,” said Lord and Miller. “That is what made him a target and it’s also what made him a star. His weekend in Las Vegas is full of fun and high jinks but it is also full of important questions about the way public figures, and workers are treated, especially when their individuality is expressed so vividly.”