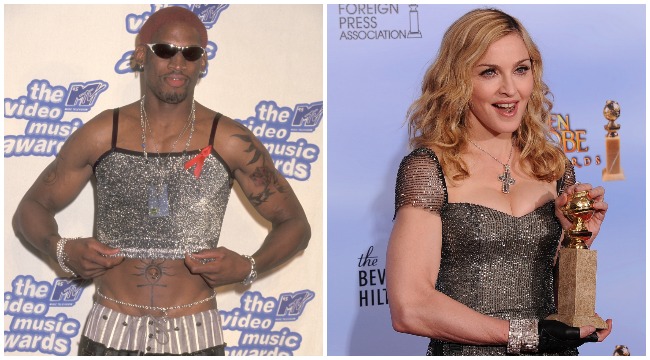 In the early 90s, the biggest cultural icon on the planet was pursuing Dennis Rodman hard and for a long time the dude treated her like a forgettable Tinder date.

Back in 2016, Rodman said that Madonna was chasing him during his time in San Antonio, calling the organization daily to try to get a piece of the Worm’s worm. Rodman kept blowing her off, because in his words “I thought her music sucked,” but he was forced to recon with the star when she just showed up in the flesh at his locker after sitting courtside for a Spurs game–“And I went back to her house. That was my life with San Antonio. I was living the basketball life and the rock-star life.”

Related: We Talked To Dennis Rodman About His Insane Gambling Stories And Why Zion Williamson Might Be Overrated

Madonna eventually won Rodman’s heart, for two months in 1994 at least, and the fling fizzled out soon thereafter.

In an interview with “The Breakfast Club” on Thursday, Rodman told an insane story about how the pop star, after only a couple months of dating, once made him an offer he couldn’t refuse.

Dennis Rodman speaks on the time he had to put his dice game on hold to take a quick flight from Vegas to New York to sleep with Madonna.

Said she offered him $20 Million if she got pregnant. pic.twitter.com/JFplqptGKe

Rodman, who was in Las Vegas at the time of the call, flew back in a jet that Madonna sent so he could sleep with her. Afterward, he immediately flew back to Vegas to finish his gambling.

“She asked me that if I got her pregnant, she’d pay me $20 million,” he told Charlamagne tha God, DJ Envy and Angela Yee. “That’s if the child was born.” [via Page Six]

At long last, the @madonna @dennisrodman VIBE magazine cover that never ran and cost me my job 25 years ago. Inspired to post by Dan Charnas’ oral history of @vibemagazine in @billboard (link in bio) which tells just a wee smidge of the whole sordid tale, the rest of which I’m saving for my memoir, “Ladies’ Man.” (Also inspired by a nudge from @erikmaza!)

Twenty million dollars is almost inconceivable to 99.99% of the population. But Madonna is worst an estimated $850 million, so let’s see how big of a dent this arrangement would have made on Madonna’s wallet using terms the average American can understand.