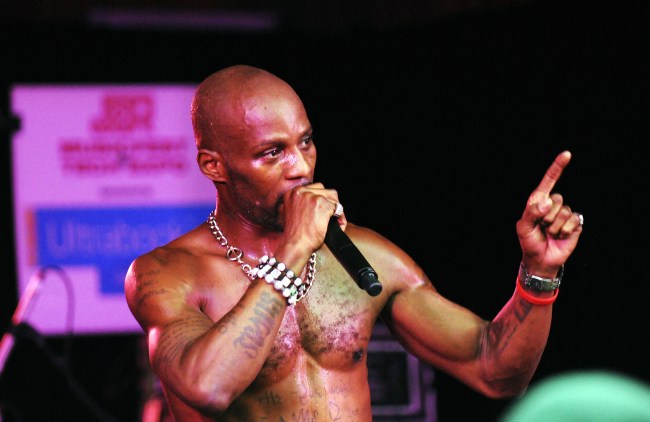 I don’t know what DMX did to piss his fiancee off, but whatever it was, he didn’t have a lot of wiggle room.

The New York rapper has reportedly been engaged to Desiree Lindstrom for nearly 4 years now, about half of their 8-year relationship. Actually I take that back about the severity to DMX’s fuck up because if you put the relationship on ice after proposing four years ago, leaving the toilet seat up could be grounds for your lady to toss that rusty ring in a well.

In any event, a video in circulation features DMX revealing to a crowd at HIS SON’S THIRD BIRTHDAY PARTY AT SKYZONE that he and Desiree got in such a bad fight the night before, that the two broke up, resulting in Desiree wearing the ring around her neck. To bury the hatchet, he purchased another ring and impromptu proposed to Desiree again, all while fighting off tears (what was all that tough guy barking about, softie?)

Preposterous. Ok, I take back my take back about the severity of DMX’s fuck up. If you are so badly forced into a corner that you choose your son’s birthday party–the one day of the year that should be entirely about him–to publicly make an apology spectacle, you probably screwed your future bride’s twin sister.

While I don’t know the genesis of the argument, DMX’s body of work leads me to believe he had sexual intercourse with a woman outside of his monogamous relationship (Work Cited: The last verse to X’s ‘What These Bitches Want‘ tune).