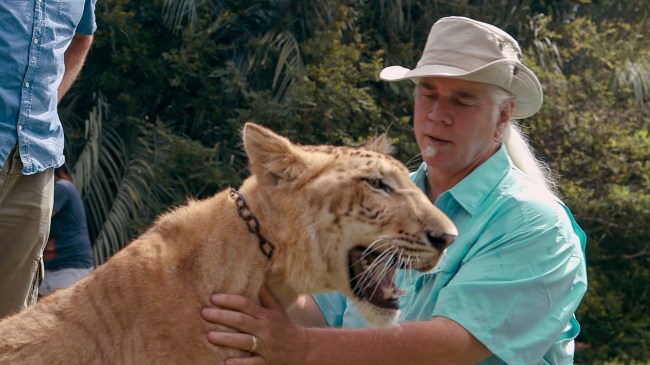 As much as Netflix’s hit show ‘Tiger King‘ brought fame to names like Joe Exotic, Carole Baskin, and Doc Antle, it has also come at a price. Myrtle Beach safari owner Doc Antle has been on the forefront of numerous claims and allegations which has led to organizations like PETA coming for him and challenging his conduct with both animals and his employees.

One of the most jaw-dropping moments of the show was when Antle’s former zoo employee Barbara Fisher claimed she was paid $100 a week for 17-hour workdays and was forced into receiving breast implants.

“He controlled every aspect of our day, what we were allowed to do, eat and even pushed me to get implants. I don’t remember agreeing to the implants, it was more that the appointments were already made, I was too scared to say that I didn’t want to,” said Fisher, who worked for Antle from 1999 to 2007.

Antle joined The Brilliantly Dumb Show and was asked to respond to the claims that were made from Fisher including the allegation that she was forced to sleep in stalls infested with cockroaches.

“This is a 30 million dollar facility that is exquisite. That girl (Barbara Fisher) lived in a beautiful house,” Antle said. “Did she ever work in the great big tiger barn? Sure. But that tiger barn looks like this house I am in right now, it is white tile, it is all beautifully way out and has been that way since I moved there in the early 90’s.”

Antle has recently just released his web docuseries ‘Tiger Kingdom’ which was a way for him to try and separate people’s opinions of him from what they saw in the hit show ‘Tiger King.’ His show was released just days before Antle was indicted in Virginia on 15 charges that include wildlife trafficking and animal cruelty related to his activity with lions.