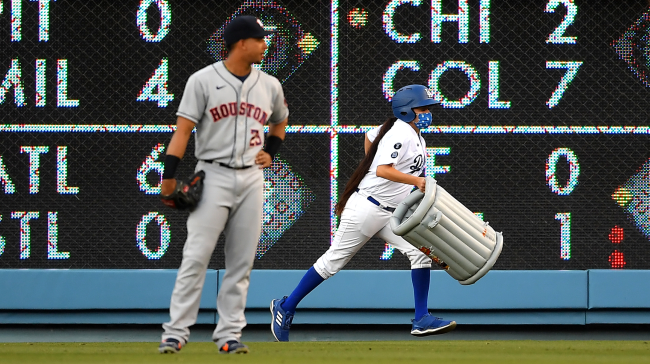 With fans not allowed to attend Major League Baseball games for almost all of the 2020 season, the Houston Astros got a bit of a reprieve from fans taunting them over the team’s sign stealing scandal.

The coronavirus pandemic hit just as teams were making final preparations for the 2020 MLB season, shutting down the league before eventually holding a abbreviated season without fans in attendance at games.

The Astros did have to deal with a few fans during spring training in 2020, and the team was the subject of numerous lawsuits, not to mention some horrifically bad publicity for how the scandal was handled, but all in all they escaped pretty unscathed.

No one was more angry about the Astros’ sign stealing scandal than members and fans of the 2017 Los Angeles Dodgers, who felt, according to the words of Cody Bellinger, Houston “stole the ring.”

Now that fans are back in full force, Dodgers fans have been venting a year’s worth of pent-up frustration on the Astros anytime the team visits Los Angeles.

A perfect example of just how angry many Dodgers fans still are was in evidence Tuesday night when one fan handed out chant sheets to people at Dodger Stadium.

Dodger fans are being handed this before they enter the park.

To whomever set this up: THIS IS GOLD! pic.twitter.com/CFUcqFqK5g

Unfortunately, it didn’t work as the Astros shut out the Dodgers 3 to 0 behind the pitching of Lance McCullers Jr. – the only pitcher on Houston’s 2021 active roster who was also on the 2017 World Series team.

That aside, many of the MLB season-high 52,692 in attendance still got some semblance of relief with trash cans and asterisks seen scattered throughout the crowd.

Altuve walks back to dugout with foam finger asterisks in his face pic.twitter.com/Fzz3mjukun

And in more than one instance, on the field of play…

Another trash can was thrown on the field during tonight's Astros-Dodgers game, this time during Altuve's 2nd AB. pic.twitter.com/PQO4KAdOsj

After the game, McCullers said that despite all of the distractions, “It was probably the most fun I’ve had pitching in quite a while. I enjoyed the reception on the way out from the pen. There were a lot of people here and obviously a lot of booing, but I liked it. I enjoyed it.”

The same can’t be said for some Astros fans located near the bullpen, according to Houston reliever Ryne Stanek.

“We just sat there and watched people throw full beers at Astros fans,” said Stanek. “It was bonkers out there for a while.”

The two teams are back in action on Wednesday at 6:40 p.m.