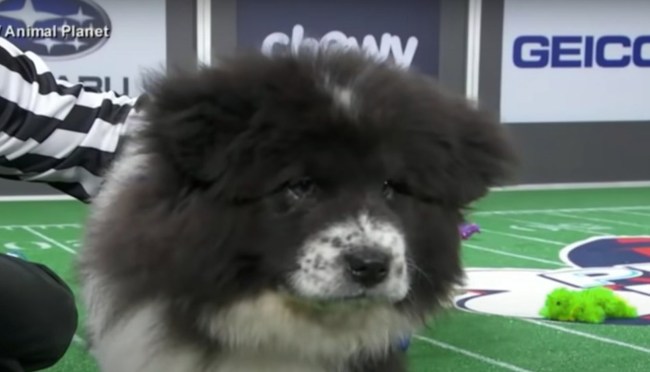 Tom Brady may have taken home yet another MVP award for his performance in the 2021 Super Bowl, but, at least according to much of the internet, the real hero of Super Bowl Sunday was a fluffy pup named Chunky Monkey.

On Sunday, prior to the kickoff of Super Bowl LV, 70 puppies from 22 different animal shelters took to the gridiron for Puppy Bowl XVII and while Muffin may have scored the first touchdown of the 17th edition of the Puppy Bowl (watch the action below), it was Chunky Monkey who stole everyone’s hearts and minds with her complete apathy towards the event.

Chunky Monkey not into the game so far pic.twitter.com/oIUxuM1QQM

This setback certainly did not help her team as they ended up taking the L, losing to Team Ruff by a score of 73 to 69.

The internet didn’t care though. Chunky Monkey was immediately hailed as a Puppy Bowl icon.

If humans had fouls for excessive slumber, I would have been out of the game long ago. Get it, Chunky Monkey! Avenge all of us who handle stress with sleep! https://t.co/2Mmy0oXlu9

Excuse me chunky monkey is doing her best

Also on the plus side, her teammate Marshall, a seven-month-old Boston Terrier was able to take home the Puppy Bowl XVII MVP Award.

As an added bonus, despite the MANY pleas by viewers wanting to adopt Chunky Monkey, she had already been given a new home by Rod and Cassandra Asekhauno and she was able to join them in watching the Puppy Bowl on Sunday. She even appeared to stay awake for it.

Chunky munky is MVP in my eyes 🐶 ❤️