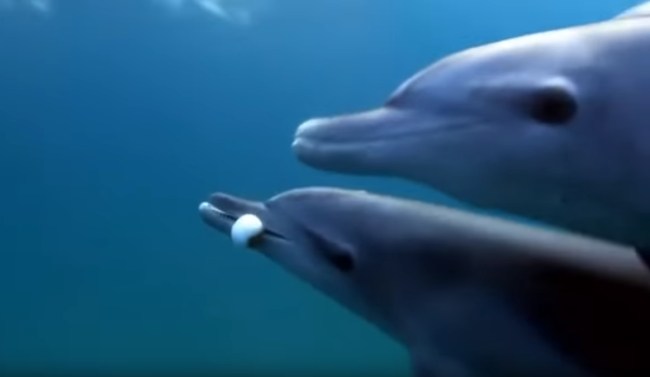 According to scientists, dolphins like to get high and they share their recreational drug with their friends. Dolphins, they’re just like us! A zoologist found dolphins getting high on pufferfish and then sharing with their finned friends. Never has “puff, puff, pass” been more real than this.

On Friday, Twitter user Daniel Holland tweeted: “Pufferfish release a toxin when they puff out that is meant to impair the attacker. This doesn’t work on Dolphins in the same way. It gets them high. So they purposely inflate them and pass them around to their dolphin friends for fun.” The tweet also included a link to Smithsonian Magazine article about the high AF dolphins published in 2013.

Pufferfish release a toxin when they puff out that is meant to impair the attacker. This doesn’t work on Dolphins in the same way. It gets them high. So they purposely inflate them and pass them around to their dolphin friends for fun. https://t.co/h1U59K9ksn pic.twitter.com/zd1uGQigJC

The article references information from the documentary Dolphin: Spy in the Pod. In the BBC documentary, there is footage of the aquatic mammals hunting for a pufferfish and then not eating it, but putting it in their mouth, then sharing it with each other. Zoologist Rob Pilley said that it was the first time dolphins had been filmed using pufferfish as drugs. That’s how a lifetime of drug abuse begins, with a gateway drug like pufferfish, the next thing you know you’re pulling tricks to be able to afford one hit of a box jellyfish.

Apparently, pufferfish’s liver produces tetrodotoxin (TTX) from bacteria and weaponizes it as a method of defense. The neurotoxin can kill predators such as other fish and even humans. However, larger fish such as tiger sharks and dolphins are immune to the poison.

RELATED: Birds Are Getting Sh*tfaced And Drunk Dive-Bombing Houses And Cars

TFW the pufferfish kicks in and you start to wonder if humans are just dolphins with legs.

“This was a case of young dolphins purposely experimenting with something we know to be intoxicating,” Pilley said. “After chewing the puffer gently and passing it round, they began acting most peculiarly, hanging around with their noses at the surface as if fascinated by their own reflection.” Okay, but where do they get pizza after getting blazed?

RELATED: The Dangers Of CWD, The Zombie Deer Disease That Could Spread To Humans – How Hunters Can Protect Themselves