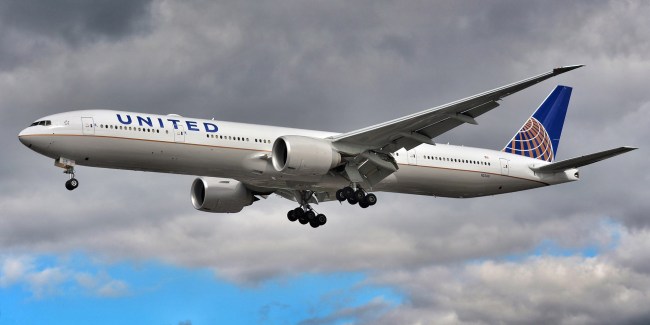 As the Boeing 777-200 jet circled back to Denver International Airport debris from the damaged engine was scattered throughout several Colorado neighborhoods.

The doorbell camera of one home in Colorado captured startling video of jet debris crashing to the ground as Flight 328 passed overhead.

The footage, shared by CBS Denver reporter Conor McCue, came from a Nest camera on the home of Mark Moskovics in Broomfield, a suburb of Denver.

In the video we see one piece of jet debris crash into the street in front of the house with a loud thud. That is then followed by another, louder sound of something barely visible in the very far lefthand side of the video hitting the ground.

Wow! Mark Moskovics’ Ring camera caught the moment this piece of debris came crashing down in his neighborhood in Broomfield. You can also hear other pieces coming down off-screen @CBSDenver pic.twitter.com/bnQI4MVGSo

One of Moskovics’ neighbors, Lonnie Kermoade, was home when the debris was falling – some of it in his yard – and said it sounded like a “war zone.”

“It could have been real tragic,” Kermoade told CBS Denver. “Fortunately, God was looking over everyone.”

Gabe Armenta from Broomfield, Colorado describes debris falling from sky on to his street: "I've seen fighter jets that have crashed, but to be in a neighborhood and see pieces of a plane, it's surreal" – Denver to Honolulu #UA328 flight forced to make emergency landing @KITV4 pic.twitter.com/9h9lCeObdn

Kirby Klements of Broomfield describes his Saturday, when debris from a jet landed in his yard. pic.twitter.com/XsQ223Isol

Other jet debris smashed down in a nearby park where at least six soccer teams were training, reports the Denver Post.

Given the number of people who are at Commons Park on a weekend day we are beyond grateful that no one was injured.

Heather Solar, a coach for one of the soccer teams, told the Post, “Honestly… I thought we were being bombed. There was so much debris in the sky.”

Also on Saturday, a Longtail Aviation 747 cargo plane in the Netherlands dropped its engine parts over the Dutch town of Meerssen, causing damage and injuring a woman shortly after take-off.

The National Transportation Safety Board announced it is investigating the incident, but has not yet offically determined the cause of the engine failure. Boeing has recommended the suspension of 777s using the PW4000 turbine found in both jets that experienced failures over the weekend.

✈️ #Boeing Co has recommended suspending the use certain 777 jets after an engine failure caused a plane to shed debris over #Denver at the weekend.@carysgarland has the story ⤵️ pic.twitter.com/mZJlay6ag2