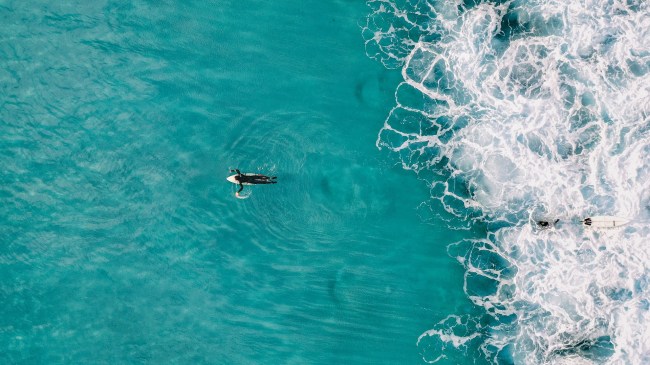 Australian pro surfer Matt Wilkinson is taking a few days off before getting back in the water after a drone capture a large and fast-moving shark pop up on him while he was paddling in an incident eerily reminiscent of another one involving fellow pro surfer Mick Fanning a few years ago.

Wilkinson grew up in Copacabana in New South Wales and knows the coast as well as anyone and suggested that he’s always been aware of sharks in the water while he was surfing but hadn’t ever experienced it like this until now. He joked on Instagram ‘A few rounds of golf coming up I think’ after sharing the drone footage with his followers to which fellow pro Mick Fanning who had a wild shark encounter in a contest in 2015 responded ‘so glad you’re ok mate.’

All things considered, what he got out of this was some cool footage and he was the beneficiary of a cool drone ‘rescue’. The drone which captured the footage also swooped down to alert him of the dangerous situation he was in but by that point, he was already aware because he’d heard the splash.

The world championship tour surfer was paddling on his board near Sharpes Beach on Wednesday when a shark swam quickly up behind him. “I heard a splash and a noise and looked around and couldn’t see anything,” Wilkinson said, according to a statement from Surf Life Saving NSW. Surf lifesavers were operating a drone overhead and were able to broadcast a warning from the aircraft’s speakers.

“The drone came down and told me that there was a dangerous shark in the area, return to the beach,” Wilkinson said. “I got to the shore feeling a bit weird and the lifeguards showed me the footage and I realised how close it came without knowing it was there. It looks like it’s going for my leg and it’s changed its mind. “I’ve been surfing with sharks my whole life and I understand they’re there and know enough about them to know they have not too much interest in humans. I’m just glad today the shark reconsidered at the last second,” Wilkinson said. (via The Guardian)

In this clip below, you can see just how close the shark was to ending his otherwise normal day in the water but all’s well that ends well, right?

A few rounds of golf coming up I think 😬

The whole encounter sounds surreal for Matt Wilkinson. I cannot imagine being warned by a drone that appears out of nowhere and is gone within an instant:

“I feel grateful and pretty weird at the same time but happy it decided not to go me. When I saw the footage I saw the similarities, like, I had a yellow leg rope on and Mick’s board was yellow is what I was thinking about when I came in,” Wilkinson said. “I called my wife because I didn’t want her to see the footage before I saw it. She doesn’t want me surfing for a couple of days now.”

The drone operator, Beau Monks, described watching the encounter from his monitor on shore. “It sort of came out of nowhere, then went right up to Matt. It moved pretty fast. I was tracking it and notified the lifeguards and used the speaker on the drone to get everyone out of the water,” he said. “Within 10 seconds it was at the surfer and five seconds later it was gone.” (via The Guardian)

Matt Wilkson’s pro surfing career exploded in 2016 when he won back to back Championship Tour events at Snapper Rocks and Bells Beach and went on to win the Outerknown Fiji Pro in 2017 and register a 5th and two 9th place finishes in 2018.

The encounter is drawing a lot of similarities to the one fellow pro surfer Mick Fanning had at the J-Bay Open in 2015 which honestly feels like just yesterday. In my head this was only a year or two ago. It’s wild how time flies. Here’s that Mick Fanning encounter at J-Bay:

Drones are being viewed as ‘the future of aerial surveillance’ according to chief executive of Surf Life Saving NSW Steven Pearce which sounds to me like proof that we are living in the future. It also sounds like a truly exhausting way for lifeguards to patrol the beach all day from their lifeguard stands having to be glued to a screen instead of watching swimmers with binoculars.

For more on this encounter, you can head on over to the Guardian‘s article.