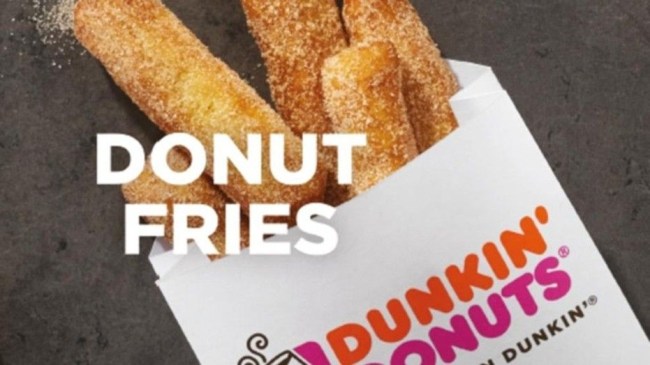 The donut fries, which sound an awful lot like churros, are small doughnut rectangles that are dusted with cinnamon and sugar. The donut fries are being tested out at three select Dunkin’ Donuts locations in the Boston area. The sugary, fried goodness is available for $1.99 and comes with five donut fries. “[They] pair perfectly with Dunkin’ Donuts’ signature beverages and are ideal for an energizing afternoon break,” Dunkin’ Donuts said. If the donut fries do will in Boston they will be rolled out nationally and possibly be given a permanent spot on the DD menu. Boston, don’t mess this up for the rest of us.

“The test is designed to gather valuable feedback from consumers, franchisees and their employees to help inform future decisions about a possible national rollout,” the yeast ring purveyor said in a statement. The donut fries are part of Dunkin’s $2 value snack menu called “Go2s” that features “several new sweet and savory items.” Also on the discount menu is pretzel bites, waffle-breaded chicken tenders, gluten-free brownies, ham-and-cheese rollups, and Munchkin dippers with chocolate sauce.

Dunkin Donuts looks like they are attempting to compete directly with Taco Bell, which introduced Nacho Fries earlier this year and has an expanding $1 menu that they plan to have 20 food items by the end of 2018. Check out this hilarious fake Boston Dunkin’ Donuts commercial from SNL starring Casey Affleck HERE.