Missing Durr Burger From ‘Fortnite’ Pops Up In The Real World, Could It Mean A New Map? 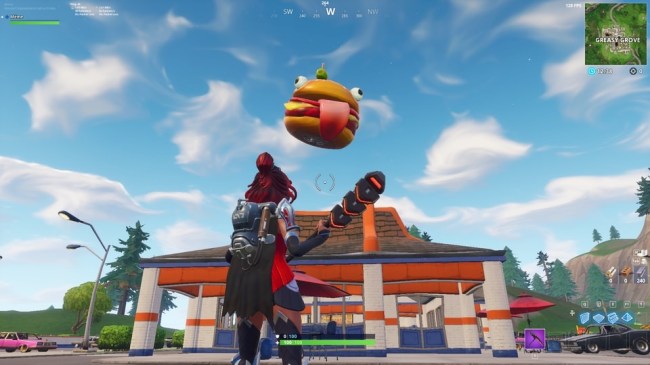 The recent rocket launch in Fortnite left a giant crack in the sky of the Battle Royale map. Rifts have opened up across the sky and one of the portals popped up over Greasy Grove on July 5th and swallowed up the Durr Burger sign.

Bye Durrr, you were a good soldier. pic.twitter.com/sRw5BDbS5I

Nobody knew where the anthropomorphic burger with a comically large tongue disappeared to until someone “just so happened to stumble upon” the sign in the real world. Photographer Sela Shiloni found the Durr Burger IRL in a desert in California.

What…. is this… I’m in the middle of the desert why is this here??? pic.twitter.com/oTMiGc0Wno

Shiloni provided a video to prove that the Durr Burger was real and not photoshopped.

Here’s a video for you. It’s definitely not photoshopped pic.twitter.com/8F2adJ29V5

There was also a tent and a police car in the immediate area.

I don’t have one 😫. I have other videos but didn’t think I’d need one of me touching it lol pic.twitter.com/gcOuiY334y

The Durr Burger is located at 15160 E Ave S, Llano, CA 93544. Twitter User @A2K_Kilo trekked out into the desert and saw the Durr Burger first-hand as well as a police car and a sign that read “This site is unstable, beware of possible effects.”

Checked out the burger head in the desert. This is what was here guy gave me a card too. pic.twitter.com/NuMMGgDqbb

The police car appears to be the ’80s version from the massively popular video game.

There was also a man inspecting the Durr Burger who gave him a business card that read “Agent #3678” on the front and a phone number on the back.

Card from the anomoly site pic.twitter.com/jdLOOoWZzZ

The agents card as requested pic.twitter.com/CgxXrXYj8S

The phone number, (712) 380-4091, is based out of Esteherville, Iowa. When you call the number you hear the same noises that the open portals make in Battle Royale. Some Fortnite gamers believe that Epic Games is giving hints to a brand new map that is based in the desert. Whatever it is, this is definitely some slick storytelling/marketing by Epic Games.

While you’re here, check out all of the magnificent structures and ramps that people made in Fortnite‘s Playground Mode before it goes away this week.