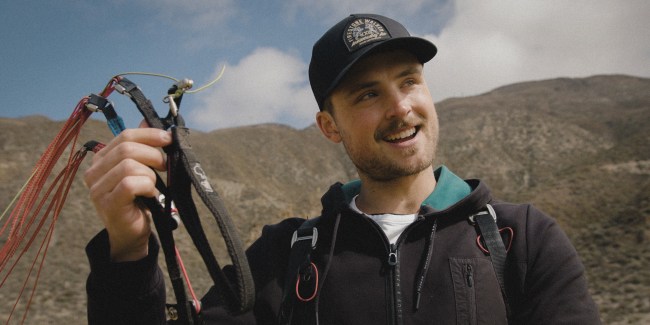 Dylan Efron went full-send off of the side of a mountain in the most recent episode of his show Flow State on YouTube, presented by Firestone Walker. Efron, brother of Zac, joined former U.S. Army Ranger Pearce Cucchissi outside of Los Angeles to go speed-flying. He was tasked with simple flight plan: “Get in the air, turn right, pull the breaks, stick the landing… and don’t land on your ass!”

He got the first four parts right. The last one, not so much.

Speed-flying is a hybrid sport that combines paragliding and parachuting. It is done by launching off of a slope by foot and flying close to the hill or mountain. What makes speed-flying unique is that it is meant to create a fast, thrilling ride, rather than a longer, gentler flight. It’s essentially running off of a cliff with a parachute. Efron begins on the “bunny hill” and figures out how to navigate his new challenge by day’s end.

Staring challenges in the face is what Flow State is all about. Efron defines a “flow state” as an “optimal state of consciousness where one feels and performs at his/her best while being completely being immersed in an activity,” and his show is focused on pushing athletes and celebrities out of their comfort zones into complete immersion. Other guests and adventures include off-roading with beach volleyball brothers Maddison and Riley McKibbin, rock climbing with XGames skater Leticia Bufoni and getting seasick while spearfishing with JuJu Smith-Schuester.

Efron and Firestone Walker’s shared ethos and passion for life made for the perfect partnership to showcase his love of adventure and commitment to exploration. He spends a lot of time traveling the West Coast in his van ‘The Wolf’ and decided to bring a few friends along for the journey. The result not only makes for a great visual, but it brings an introspective look at the importance of trying something new and taking risk. You can watch the full series here.