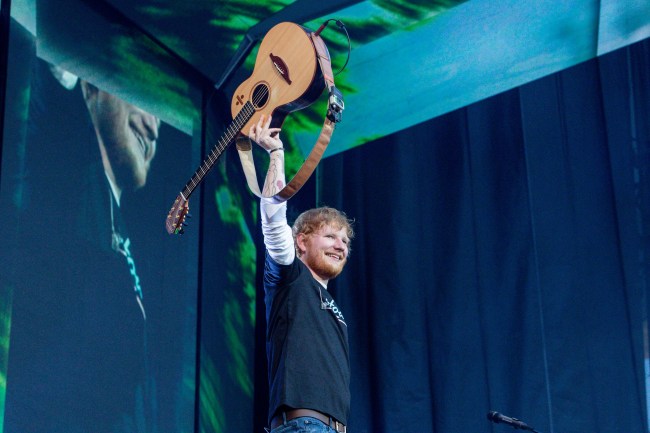 The 28-year-old English singer-songwriter broke a record for ticket sales last year, selling almost 5 million tickets during his world tour to amass more than $432 million over the course of a calendar year. For perspective, that’s about $90 million more than Taylor Swift earned that year, Fox News points out.

Oh yeah, and most importantly, it wasn’t too long ago when he got Pussy Cat Dolls bombshell Nicole Scherzinger in the sack.

But before Sheeran broke onto the scene in January 2011 with independent EP, No. 5 Collaborations Project, the odds of him succeeding in the music world were–from an outsiders perspective–astronomically stacked against him. Aesthetically, Sheeran looks less like a pop star and more like a Magic The Gathering guru. His signature marketing tactic was performing on the UK subway platform.

Max Stocker, press officer at Ipswich Borough Council who’s known Sheeran since he was young, didn’t even believe in him.

“I asked him what he wanted to do with his life and he said he wanted to be a singer-songwriter and tour the world.

“My immortal response was, ‘Well that isn’t going to happen so why don’t you go back to school and concentrate on your GCSEs?’ And I’ve never lived it down.”

But Max’s pessimism wasn’t malicious, but rather rooted in the data. Ed Sheeran was a shit music student, academically speaking.

Sheeran’s dad, John, donated hundreds of items to a new exhibition in Ipswich titled  Ed Sheeran: Made In Suffolk, one of them being a college report card in which Sheeran earned SIX F’s at the Academy of Contemporary Music in Guildford in courses like songwriting, professional musicianship, music industry prep and style development.

“But he definitely was an incredible performer and he could definitely write a song. He didn’t ever give up.”

Never give up. Anything is possible. Work cited: this.

One thing #EdSheeran didn't fail is dance class… Grade A* from us!🕺 pic.twitter.com/5UUv7invE7

That man is days away from completing the highest-grossing tour of ALL TIME.