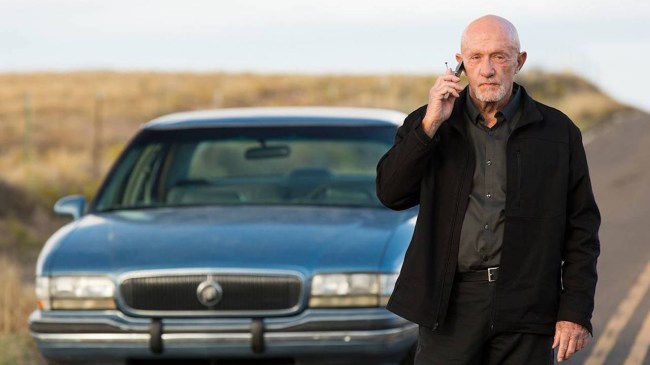 With the release of El Camino: A Breaking Bad Movie just weeks away, more and more details about the highly anticipated Breaking Bad sequel have begun to spill out, including the cast of characters that are set to appear in the film.

Speaking to The Hollywood Reporter, Breaking Bad series creator Vince Gilligan revealed that “more than ten” familiar faces would be appearing in El Camino. But while Gilligan revealed the number of characters that would appear, he didn’t specify which ones, as he is wisely trying to keep that as a surprise. Someone obviously didn’t relay that message to Mike Ehrmantraut actor Jonathan Banks, though.

When asked by ET Canada on his way into the Emmy Awards on Sunday, Banks revealed that he, too, will be appearing in El Camino: A Breaking Bad Movie.

“Yes,” Banks said when asked if he’ll appear in the film. “They’ll hit me in the head for saying this, but yes. Why not? None of those guys hit very hard anyway.”

Prior to Banks’ slip, only three characters had been confirmed to appear: Jesse Pinkman, Badger, and Skinny Pete.

It’s been a busy few days for the El Camino press machine, as a new teaser was aired during the Emmy Awards on Sunday, followed by the release of the full, breathtaking trailer earlier this morning.

While the new trailer — which provides fans their first in-depth look at the film — did not include any scenes with Ehrmantraut, it did reveal that Jesse does, in fact, link back up with his old buddies Badger and Skinny Pete.